Following the road signs by car, motorbike or camper for the port of Piombino

Once you get to Piombino Marittima you can choose whether to leave your car in a car park with surveillance or take it with you on the ferry for the Island of Elba.

Coming from the north 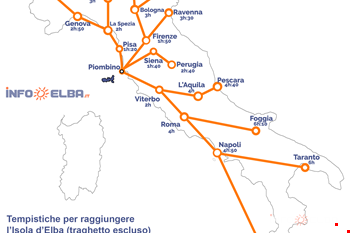 Take the A21 motorway from Turin in the direction of Alessandria then take the exit for A26 "Alessandria sud" in the direction of Genova. Keep going along the A10 and head for "Genova/Livorno", then take the exit A12 for "Genova Est/Livorno". Keep going till you get to Rosignano Marittimo, then exit and follow the SS1 - Via Aurelia for Grosseto, exit when you see the sign "Venturina - Island of Elba" and head for Piombino Marittima/Embarkation.

Coming from Venice take the A4 for Milan/Bologna, and once you've gone past Vigonza take the exit for the A13 Bologna/Padova (at Padova Est). Keep going in the direction of Bologna then take the exit for the A14 for Milan/Florence/Bologna/Borgo Panigale, keep going towards Florence and follow the A1. After about 25 km exit for the A1 - Variante di Valico "Direttissima" (compared to the "Panoramica" route - more historical and very popular among tourists -this option is 32 km long and will save you time and petrol) then keep gong along the A1.

In Florence you have two options. The first is to follow the motorway along the A11/E76 and E80 then exit at Genova/Livorno/Rosignano M./Rome and take the A12/E80 in the direction of Rosignano M./Rome/Livorno. The second is to leave the motorway at Firenze Scandicci then follow the Strada di Grande Comunicazione FI-PI-LI that is free. About 66 km further on, exit at Genova/Rome/Firenze, follow the signs for Rosignano M./Rome and take the A12/E80. Although compared to the SGC motorway it is about 30 km longer it is obviously quicker because you have to respect the speed limit of 90 kph along the FI-PI-LI. The advantage is you save about 5 euros pay toll. Both options however mean you exit at Rosignano Marittimo and take the SS1 - Via Aurelia in the direction of Grosseto, then exit at the sign "Venturina - Island of Elba" and head for Piombino Marittima / Embarkation.

Coming from the south

From Bari take the A14 motorway for Pescara, head for Naples then take the A16 until you reach the exit for the A31 Caserta/Rome. Take the A1 for Rome, then follow the signs for the A12 Civitavecchia, exit at Civitavecchia and take the SS1 for Grosseto Livorno. Exit at the "Venturina - Island of Elba" sign and head for Piombino Marittima/Embarkation.

Garages and car parks in Piombino

Useful information about where to leave your car, motorbike or camper in the Port of Piombino Marittima before getting on the ferry for the Island of Elba.

The best hotel to give your holiday a perfect start or to complete your stay. Right on the beach at only 200 metres from where you catch the ferry to Elba.