Blu Navy, along with Moby and Toremar, does the Piombino-Elba crossings 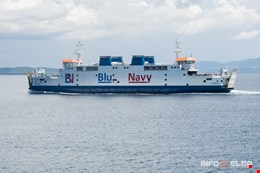 Since the summer of 2010, as well as the other two long-running shipping companies, the Blu Navy shipping company too has done crossings to and from Piombino Marittima and the Island of Elba.

Their first ferry on this crossing was the Primrose, but in 2011 the new ferry Achaeos, smoother and easier to steer, took its place. Since 2012 a new, much bigger ferry, the Acciarello, has taken their place. It can carry up to 800 passengers and 230 cars, and can sail at a speed of 16 knots.

Since 2019 the Blu Navy shipping company has done three return crossings to and from Portoferraio and Piombino , in winter too, as well as having a smaller ferry , the Ichnusa.

Blu Navy ferry tickets can be bought either on line or at the ticket offices in the port of Piombino, at 11, Piazzale S.Allende, or in that in Portoferraio, at 8, Calata Italia.

Residents, as well as those born on the island but living elsewhere, and groups, are granted a special discount. Residents and commuters may purchase a monthly season ticket for 33 euros.

The second Blu Navy ferry that has enabled the the shipping company to increase the crossings to and from Elba - Piombino during the summer.

The Blu Navy ferry that allows the company to increase the ferries to and from Elba and Piombino- in the months of January, February and March.

The Blu Navy ferry that crosses to and from Elba and Piombino during the winter (from December to April).