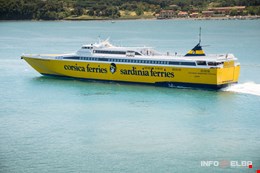 The Corsica Sardinia Ferries Shipping Company was founded under the name of Corsica Line by the Corsican entrepreneur Pascal P. Lota in 1968. Since then, and up to the present day, it takes both passengers and vehicles from the French island to Italy and France, and from Sardinia to Italy, and since 2012 it has also done crossings to and from theIsland of Elba.

It sails to and from major Mediterranean ports like Tolone, Nice, Savona, Livorno, Piombino and Civitavecchia, as well as Bastia, Ile Rousse, Calvi, Ajaccio and Bonifacio in Corsica, Portoferraio on the Island of Elba, and Santa Teresa and Golfo Aranci in Sardinia.

The fleet totals 13 ferries between traditional ships and the more recent Cruise Ferries, and every year transports more than three million passengers.
This company also deals with goods transportation, and in 2008 it bought over most of the shares from the Strade Blu, a shipping company whose main interest is transporting goods to and from the north of Italy and Sicily, and that has transferred its operating terminal from Genoa Voltri to Savona Porto Vado; as well as continuing the transport of goods to and from Sicily, it also does a new route to and from Livorno, Olbia and Cagliari.

The HSC Corsica Express Three ferry also carries vehicles, and can carry up to 150 vehicles and 535 passengers who can enjoy the comfort of sitting in soft, Business Class loungers.

Since 1968 Corsica Sardinia Ferries has been at the top of the list as regards number of passengers carried by a private shipping company that also covers Corsica and Sardinia all year round.

All Corsica Sardinia Ferries sailings have the ISO 9001:2008 certificate.

In summer you can also do the crossing to and from Corsica, and to and from Portoferraio and Bastia! The Portoferraio-Bastia crossing only takes 1 hour and 30 minutes, and is done twice a week.

Information and hygiene-sanification measures on board the Corsica Sardinia Ferries in a attempt to deal with the COVID-19 emergency in the best possible way.

Getting to the Island of Elba low-cost thanks to an agreement between BlaBlaCar and Corsica Sardinia Ferries.