Sailing across the stretch of water that separates Elba from the Mainland: the islands and views to admire 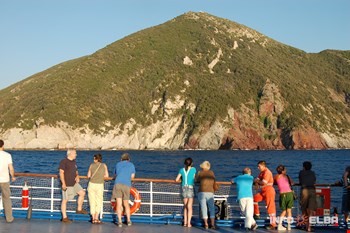 One of the first things you will come across during your holiday in Elba are the seagulls. You will see them as soon as you get to the port of Piombino as they fly over the jetties, or as they fly down amidst the cars and the tourists "asking" for food. Try throwing them some breadcrumbs and see how dozens of them appear. The beautiful herring gull, with its candid white feathers on its breast and grey and white ones on its wings, its yellow beak and legs, and its eyes with a red outline. Not forgetting the chicks that are more of a greyish/brownish colour and smaller than the adults.

Once the crossing from Piombino to Portoferraio has started and the port of Piombino is now behind you, the first tiny island you will see is the Island of Cerboli in the distance, then the Island of Palmaiolathat has a lighthouse. Both islands are part of the Tuscan Archipelago National Park. 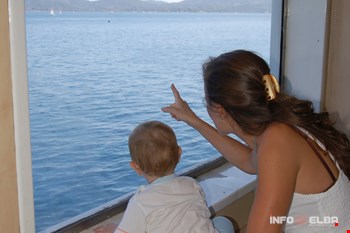 The Island of Palmaiola takes its name from the many dwarf palm trees that once grew there, covers an area of about 8 hectares and is about 85 metres above sea level.
Once you have passed the islands, still on your left, the first part of the Island of Elba you will see is Cavo with a small island called Isolotto dei Topi. The actual town of Cavo lies somewhat hidden from what you can see from the ferry.

So, you will see all these places in this order Nisportino, Nisporto, Bagnaia, Magazzini and Schiopparello. By this time you are inside the bay of Portoferraio and on the right you can first admire the Scoglietto, the tiny island opposite Portoferraio (or to be more precise opposite the Le Viste beach) then the Medicean walls and Forte Falcone, theLorena lighthouse, and finally the Passanante or Martello tower.