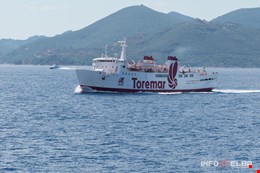 TOREMAR has connected most of the Tuscan Archipelago islands for more than thirty years, with the exception of Giannutri and Montecristo where access is not allowed. Under the name of Navigazione Toscana it has sent ferries to and from Piombino and Portoferraio since 1914. In 2011, the Moby S.p.A. shipping company bought over the entire company.

In 2015 the renovation work carried out on the entire fleet, both in the engine rooms and in the passenger areas, was completed, and the company was given the title of the World's first "SmartFerry" shipping company: passengers now have use of the free wi-fi service for the entire crossing; multimedial totems have been installed in the area known as "Social Corner" where there is also a Totem battery charger. More recently a partnership between RCS and Quibee has been created, so if passengers wish, they can now take free advantage of the articles published by the RCS Group, above all in the "Corriere della Sera", "La Gazzetta dello Sport" and any other of their newspapers.

Frequent daily crossings to and from the Island of Elba, Giglio, Capraia, Pianosa and Gorgona are done by the TOREMAR fleet which has both ferries and hydrofoils.

As regards the Island of Elba, the crossings are as follows:

If you need any information or help please contact the Gruppo Moby, Tirrenia and Toremar call center  The number of the call center for passengers on both Moby and Tirrenia ferries is 800 804020, while the one for lorry drivers is 800 340350. The number for passengers travelling on Toremar ferries to and from Tuscany, the Island of Elba and the Tuscan Archipelago is 800 304035.

Suggestions on how to spend less

On the Toremar ferries children's tickets are always economical:

Hired vehicles have a 30% discount on return tickets on the Piombino-Portoferraio crossing, except on Mondays and Fridays in July and August, and for the entire mid and high season.

Ferry to and from Elba of the Toremar shipping company: the second "Smart Ferry" in Italy as well as one of the most advanced.

Toremar Shipping Company ferry for the crossing to and from the Island of Elba: Piombino - Rio Marina

This fast way to cross that came from the Island of Wight that replaced the Acapulco Jet for the Piombino - Cavo - Portoferraio crossings. Passengers only.