Recipe for Castagnaccio and fritters

Castagnaccio is a typical recipe from Elba: a sweet that was invented by the poor, country people and was an alternative to the more humble version made with maize flour, and that is now considered a delicacy.

Depending on what was available, people sometimes added nuts or pine nuts to make the sweet richer, that were collected during the summer and partially broken with a hammer (it was usually the children who did this since they looked upon it as a game), or sultanas made from the grapes left to dry in the sun or in the oven. 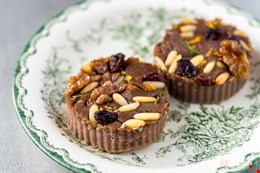 Heat oven to 200° and put sultanas in warm water to make them swell.

Sift the flour, add the salt, then add water beating all the time until you have a smooth batter.

Add the sultanas, the pine nuts (but keep some of both aside and sprinkle over the batter just before you put it i the oven), the grated orange rind and the fennel seeds.

The batter must neither be too thick or too thin.

Grease a shallow, medium sized tray and pour the liquid in, sprinkle the pine nuts and sultanas on top and a little oil, bake in oven for 30 minutes (or when a crust has formed round the sides).

There is a slightly different version to this recipe where you can use rosemary instead of fennel seeds.

Once you've made the batter, if you leave it aside for a few hours you can then make delicious fritters.

Just drop spoonfuls of the batter into a pan of hot oil, turning them once.