Once upon a time, when most people still obeyed the rules of the church, and not eating meat on a Frday was one of those rules, you very frequently saw a tub of water outside the grocer's shop with dried chickpeas and stockfish soaking inside.

This not only enabled you to save water and time but meant the chickpeas absorbed the salt and flavour of the stockfish.

Being already softened, the stockfish and the chickpeas were ready for sale and then be cooked by the women on the island. Here is the recipe. 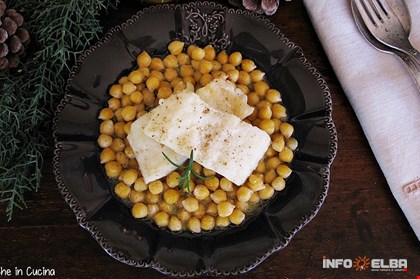 Put the chickpeas in cold, unsalted water with a teaspoon of bicarbonate of soda and bring to the boil; add the onion, carrots and celery.

Gently fry the garlic, the chilli pepper and some sage in a separate pan then add the pieces of rinsed stockfish. Cook for about ten minutes, add the chick peas and cook for another five minutes.

Sprinkle with a little extra virgin oil and chopped parsely.

Serve hot with some toasted bread if you like.