A delicious starter or main course

Thanks to people who migrated to or ruled in Elba in the past recipes from Tuscany, Liguria and Provence as well as those of pirate  origins have all contributed in some way to the traditional Elba cuisine as we know it today, and the recipe for

Stuffed Mussels is an excellent example. Although this dish is a typical Ligurian dish (above all from La Spezia) and also from north-west Tuscany, everybody has his own, personal way of preparing it, Some say, for example, that the fish stuffing should also have some mortadella or minced meat.

It is however asimple cuisine dish that can easily be eaten as a tasty starter or even a delicious main course. 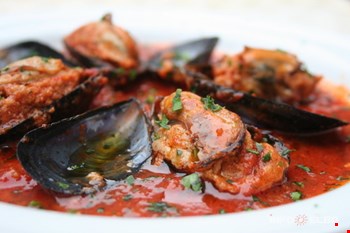 Scrape the mussels thoroughly with a knife and choose the larger ones for stuffing: you will need at least twenty-four for six people

Heat the remaining mussels for a few minutes until they open then remove them from their shell and chop finely.

Soak the stale bread in a little milk, squeeze out the excess milk then add the chopped mussels, whole eggs, 100 gr of Parmesan, chopped parsely and garlic and a pinch of pepper. Mix well so that it is not too runny. Taste for salt.

Use a knife to open the mussels to be stuffed but leave them joined at the base, drain, then stuff with the filling.

Fry the chopped onion gently in a glassful of oil, add 500-600 gr of chopped, tinned tomatoes, add a little salt and a small piece of ginger and add warm water as needed.

Delicately place the mussels in the pan and cook slowly without the lid, and make sure they don't stick to the bottom. Don't add extra water because the mussels release some of their own.

Serve the mussels with the sauce over them. .

Photos from the cinqueterreoutdoor web site