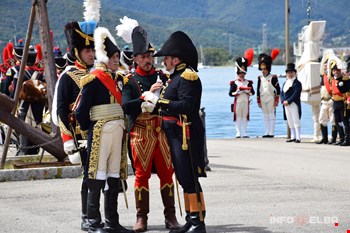 Even during the somewhat turbulent period before he landed in Elba, which shows a man's true nature is revealed only when he falls, Napoleon starts his exile in Elba in a letter he writes on April 27th 1814 from the Frejus to General Count Dasleme, Commander on the Island of Elba:

Dear General Dalesme,
circumstances have left me no choice but to give my throne in France up, and hence also my rights to the wellbeing of my country. All I have kept is my ruling over the Island of Elba and the forts of Portoferraio and Porto Longone. They have allowed me to keep my power. I'm sending you General Drouot and I beg you to hand the entire island over to him, as well as the military deposits, and all the properties I had during my reign. Please inform the locals there of this new condition and explain my high opinion of their island, saying how I liked their customs and how much I loved the climate there. They will always hold a special place in my heart.
Napoleon

The peace and quiet of the locals in Elba was suddenly turned upside down with the arrival of the new leader who, just as Napoleon had said in his letter to Dalesme, began to govern and administer the island the moment he arrived. This is what is written in official papers:

He had just set foot on the Island of Elba when he started giving orders to the locals as regards new jobs to be carried out in the town of Portoferraio and in the surrounding countryside; he had the work that had already been started on the road from this square to Piazza Lungone completed; many locals were given tasks of honour. The arts, science, agriculture and commerce were given a new lease of life, and Elba once again became an island of fortune in a time that was considered golden.

On May 7th Napoleon began giving orders on how to organize the navy, and the following day he summoned the vice prefect, the navy commissioner, the head of the registry, the war commissioner, the head tax administrator and anyone else who could have given him any information that could help him improve the administration of the town, from the tax aspects to those of the health and maritime ones. From then onwards Governor Drout was given continual imperial orders and Portoferraio looked more like a huge building site: an underground drainage system was built to stop the streets being flooded, roads were widened, knocking down walls where necessary, in order to allow the imperial carriage to pass, and the road from Napoleon's villa to the Mulini was paved:

on one side he discusses civil works, on the other Napoleon sets up his tiny army and even smaller navy; while he keeps an eye on the minimal state budget, he also gives orders on how to exploit the mines in Rio to the full, all this while he gives the impression that nothing is beyond him, that any change he wishes is within his means, and that he has no reason to fear any confrontation with bigger and more important challenges.

The great effort Bonaparte put into the military, economic and social organisation is very clear in the many letters he wrote and dispositions he gave. He dedicated much of his time in trying to improve the road network so that all the towns and villages on the island could be connected; to public sanitation to the point that those who did not have a latrine in their house had to have one within two months; to the renovation work he wanted carried out on his two official residences - Palazzo dei Mulini and his country home in San Martino.

For the nine months of his exile Elba adapted itself to Napoleon and allowed him to turn the quiet lifesyle it was used to upside down, and at the same time Napoleon adapted to being the leader of a small island, dedicating himself heart and soul to improving the social and economic running of it , stopping only when it was time for him to finally go back to France.