The magic of Napoleon and his great skills as regards organisation and communication have left an indelible mark also on the Island of Elba. Recreating the events of that time is one of the best ways of reliving that historical period and getting to know the man who for a short time in his life was "entrusted" to the Island of Elba, and in whose hands the island was put. The historical revivals are not only part of the folklore, but they are also a way of saying thankyou to Napoleon whose curiosity pushed him to want to discover various parts of Elba for himself. For this reason, as well as the traditional disembarkation that takes place every year in Portoferraio, this year other Communes on Elba have also organised ceremonies. 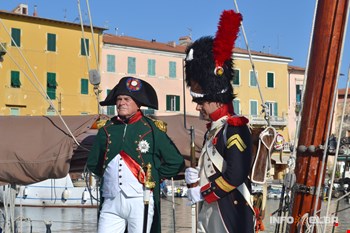 From May 2nd to May 4th Portoferraio will get ready for the disembarkation revival that will take place on May 4th at 4.00 p.m. with true to life historical settings, field troops, a remake of the nineteenth century market in Piazza Cavour, a revival of his disembarkation, and a court that will stop at the Cathedral and at the Town building. At 6.00 p.m. on May 3rdthe French choir "Les Baladins de la Chanson" will give a concert in the Dome in Portoferraio. At 6.00 p.m. on May 4th the French choir of the Fondation Napoléon will also hold a concert in the Dome in Portoferraio. At 10.30 a.m. on May 5th, the date of the Emperor's death, the traditional Mass in honour of Napoleon will be held in the Chiesa della Misericordia in Portoferraio. 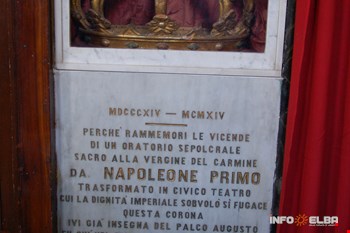 A revival of the nineteenth century market and the Emperor's departure for the Island of Pianosa will be held on May 18th in Campo nell'Elba. In the port ofPorto Azzurro on the other hand, Paolina's arrival will be represented on June 1st at 6.00 p.m., then the Grand Ball in honour of Napoleon, with everybody in traditionall clothes of the time, will be held on July 13th, and finally the historical remake of the rowing Race held at the time of the emperor will take place on August 14th. From June 6th to June 8th, at the Quarrier Festival in Capoliveri scenes from the daily life of the miners in Napoleon's days will be brought back to life. In the square of the De Laugier Centro Culturale in Portoferraio a Grand Ball in traditional costumes of the time and a show in the old part, organised by the Atelier de Dance, will be held on June 13th and 15th. In Rio Marina, a historical market will be set up on July 10th to celebrate Napoleon's visit to the mines, so important in those days for the economy of the entire island. Legend has it that Napoleon spent the night at the Hermitage of Santa Caterina in Rio nell'Elba, and that he then gave the hermit a field bed as a present, so this will be celebrated there on July 25th. On August 8th a Napoleonic Grand Ball will be held in Rio nell'Elba. Then, in Portoferraio on August 15th, Napoleon's birth date, there will be a fireworks display and a procession with people dressed in typical costumes of the time.

On September 1st, as a celebration of Napoleon's appointment with Maria Walewska, who, unlike his wife Maria Luisa D'Austria, came to Elba to see him, a revival will be held in the Sanctuary of the Madonna del Monte in Marciana.

On September 6th and 7th Maria Walewska's arrival will be celebrated in Marciana Marina with the Associations of the Armée d'Italie and the Petit Armée.

On February 26th 2015 Napoleon's departure for San Juan will be celebrated with boats and sailing ships, with the participation of the "Route Napoleon".