Napoleon left the Island of Elba at 7.00 p.m. on February 26th 1815, but he wasn't escaping because in actual fact he had been planning his departure for a long time. He boarded the Inconstant, a brig with two masts built in Livorno in 1810. The Inconstant was 30 metres long and had 14 cannons. Napoleon left with a small army consisting of 673 men, many of whom were young members of some of Elba's richest families.

Letizia, his mother, and Paolina, his sister, were on the island, but, taking advantage of the fact that his English "watchman" Campbell wasn't with him, Napoleon left Elba for San Juan in France, where he arrived on March 1st. 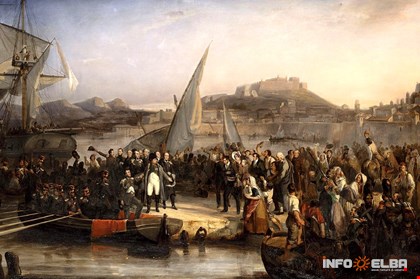 When he arrived at the port and boarded the small boat that took him out to the Inconstant, a small crowd of people, including the then Mayor of Portoferraio, had gathered to see him off. You can read about this in Souvenirs et anecdotes de l'île d'Elbe by Pons de l'Hérault, who was head of the mines in Rio as well as a direct witness of Napoleon's stay on Elba.

Although all the Elba men and women at the port kept silent when Napoleon arrived, they took off their hats to wave him off; some then wished him good luck, others told him to be careful, but all of them thanked him.

In the painting "Napoleon Ier quittant l'île d'Elbe, 26 février 1815", done by Joseph Beaume in 1836, you can see the very last minutes before Napoleon's departure. It is on show in the Antibes Musée Naval et Napoléonien in Antibes in the Côte d'Azur.