Tiny Medieval town on the hills above Marina di Campo

Sant'Ilario in Campo is a tiny, very quiet town that is part of the Commune of Campo nell'Elba.

It sits on the hills and looks on to a wonderful view of the gulf of Marina di Campo, and on a clear day you can even see the Island of Montecristo.Behind Sant'Ilario you have Monte Perone, while on the nearby hills you have the small town of San Piero.

The centre of Sant'Ilario is just as it was in the past, a Medieval town built round a church, with stairways and narrow, granite lanes lined with flowers, granite that came from the quarries in San Piero.

The main square in the town is also built in granite, and is a tiny jewel inside the Pisan fortress where children still spend many happy hours playing or listening to the stories the elderly have to tell. The Parish Church of Sant'Ilario, with its numerous frescoes, is also in the square, and originated from the ancient Romanesque fortified building. 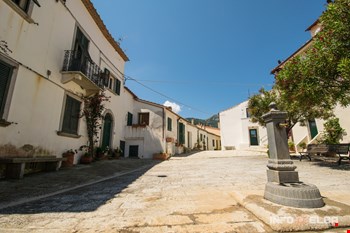 Piazza della Fonte is also very characteristic, and thanks to the numerous button-wood trees around it the locals love to sit there in the shade during the hot months or have a drink of the fresh, spring water that comes down from Monte Perone.

Interesting facts: Sant'Ilario is also famous because the famous Italian composer Giuseppe Pietri was born there, and because the "Kind Anarchist" Pietro Gori looked upon the town as a quiet and peaceful resting place.
Gori's father was from Elba (born right in Sant'Ilario), so there is a nameplate bearing his name in honour of the affection everybody felt towards him. At the time of the inauguration around 1920, there were some fights between the anarchists and the fascists who didn't want to be excluded from the ceremony, but once dictatorship was established his fellow soldiers didn't want to destroy the nameplate - as had already happened - so they hid it in their headquarters. With the fall of Mussolini, both the anarchists and the entire population put it back in its rightful place.

This tiny, quiet town has a magic of its own and during the summer many tourists cant resist going there, to the point that many consider it their holiday home.

There are no hotels in this small town, but there is a restaurant, a bar, a grocer's that also sells fresh fruit and vegetables, and a newsagent's.

On the hills overlooking the town you can go and visit the square shaped Tower of San Giovanni that dates back to Pisan times, as well as the Church of San Giovanni.

Interesting facts: Sant'Ilario, the Patron Saint of this tiny Medieval town, is celebrated on the 13th of January.