Porto Azzurro: the best paces to go and see 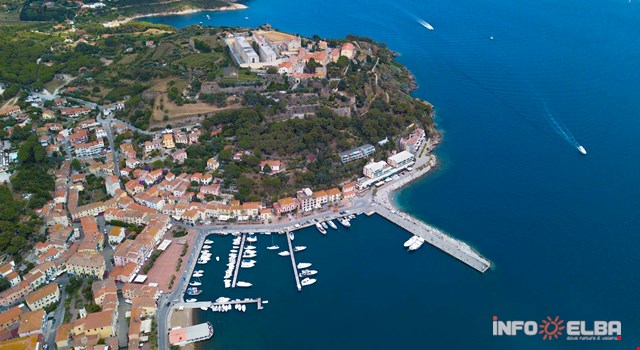 The territory of the island is so rich and varied that if you are planning a holiday in Elba, you will very likely have difficulty in choosing what part to go to. Maybe we can help you by suggesting one of Elba's most famous communes: Porto Azzurro.

Up till 1947 Porto Azzurro still had its original name of Portolongone, given to the town when it was founded in 1603 by Filippo III of Spain who wanted to to make it into a fortified town to defend the territory.

Today, with a population of about 3800, it is a typical fishing town surrounded by golden beaches and the deep blue water of the strait of Piombino. What makes this town so unique is the fact that it offers the tourists a wide choice of accommodation, not only because of its rich, natural heritage, but also thanks to its very varied artistic and cultural heritage

You only need to walk along the narrow lanes in the old part to notice the magnificent buildings of the past. Some of the most important are the Forte San Giacomo, a magnificent fortress that Filippo III had built in 1602. The aim was to strenghthen the defense area, studied by Don Garcia of Toledo, that was also a copy of the one in the city of Antwerp, in an attempt to fight the frequent attacks on behalf of the Saracen pirates; the fort was used both as a watchtower and a defense, and remained so until the beginning of the nineteenth century when it was turned into a prison.

If you are struck by the magnificence of this fort, you will no doubt be attracted to the elegance of the religious buildings; some of the most interesting in Porto Azzurro are the Church of the Madonna del Carmine and the Church of San Giacomo Maggiore, but don't forget the Madonna di Monserrato Sanctuary that the Spanish governor Pons U Leòn had built in 1606, and wanted it to be a copy of the famous sanctuary near Barcelona.

If you want to relax and sunbathe, we are sure some of your favourite beaches will be Barbarossa, or Reale and Terranera; if, on the other hand, you want to go in search of the hidden corners of the island, then a boat excursion is what you want: you have the chance of discovering hidden coves or go snorkelling and scuba diving along the breathtaking sea bed of the island.

Even after such an eventful day you wil stilll feel like a long, enjoyable evening in Porto Azzurro; the town offers a wide choice of things to do, and in the summer there are always many special events and exhibitions to take part in, so you will never be bored.

This appealing and very varied choice is completed by the wonderful Mediterranean climate, which means the temperature both in Porto Azzurro and the rest of the island is mild all year round.

Interesting facts: The patron saint of Porto Azzurro is San Giacomo, celebrated on July 25th, and many special events are held throughout the town. Not only, the Madonna di Monserrato is celebrated on September 8th.
If you wish further information please visit the web site www.elbaeventi.it.

Where to stay near Porto Azzurro

Are you looking for a place to stay for your holiday in Porto Azzurro? Visit this page to see all accommodation available near Porto Azzurro

4 places to visit that can be seen on the map
The map has already been laid out at a zoom level that enables you to see all the points of interest.