Portoferraio: the main town on the Island of Elba 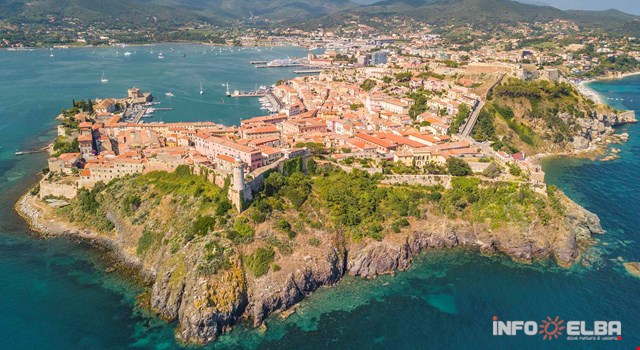 Biggest town and main port on the island, with approximately 12.000 inhabitants. Of very ancient origins, called Porto Argo in the legends, its rich mineral ores were exploited first by the Greeks, and then by the Romans who named it Fabricia.

Although four hundred years have passed since it was founded, Portoferraio sill maintains its Renaissance beauty. Cosimo 1st de Medici, Grand Duke of Tuscany, renamed the fortress town "Cosmopoli", and in the year 500 had the solid walls built around it, walls that without a doubt reveal first class engineering and outstanding architectural beauty.

The moment the ferry gets in, it is impossible not to be struck by the beauty of the docks; at the entrance to this port, considered the safest in the world even by Admiral Nelson, the first thing you see is the Torre del Martello, that belongs to the Linguella Fortress. It is also called the Torre del Passannante, since the days when it was fortified and used as a penitentiary and the man who wounded King Umbero I was imprisoned there.

Inside the Linguella building there is an interesting museum of archeology where Etruscan amphoras and remains are on show.

Forte Stella, so called because of its star shaped walls, was built in 1548 following a Camerini project, and is above the historical part of the town. Its lighthouse, erected by the Grand Duke Leopoldo di Lorena in 1788, is one of the oldest in Europe.

From here there is not only a fantastic view of the docks in Portoferraio, but also of the Villa dei Mulini, the winter residence of the French Emperor Napoleon Bonaparte. On May 3rd 1814 he landed in Portoferraio to take command of the small kingdom which, with the Treaty of Fontainebleau, had been assigned to him in exchange for his abdication.

Although his exile in Elba lasted only 10 months, Napoleon gave the island an incredible cultural and historical richness.

In the Villa dei Mulini, or in San Martino and the Demidoff Museum, beautiful furniture, very valuable works of art, imperial friezes, the amazing collection of more than a thousand volumes from Fontainebleau itself, and the flag with the three golden bees symbolizing the hardworking Elbans, are all there for you to admire. Napoleon also had important buildings built like the theatre as well as some of the main roads on the island.

On the highest part of the town, Forte Falcone, with its ramparts, represents without a doubt the most solid Medicean fortress on the island. Proof of how impregnable it was is the fact that it stood up to the many Saracen attacks, while the other fortressess in Capoliveri, Rio and Marciana were destroyed more than once by the bloody attacks on behalf of pirates.

As you go through Portoferraio's historical part, heart of ancient Cosmopoli, you will notice several interesting historical monuments and holy places, as well as narrow, winding, stepped streets that lead you to scenic squares, or old houses with balconies full of flowers, and cute corners where you'll have no problem meeting some of the locals who jump at the chance of telling you funny, interesting stories about life on the island.

Opposite the docks in Portoferraio, on the Grotte promontory, excavations have unearthed the remains of a large Roman villa, where you can admire what is left of the mosaic decorations dating back to Hadrian's time. They lay covered by bushes until 1960 when vast excavations unearthed the remains of walls in opus reticulatum, as well as spacious terraces facing the sea and even a swimming pool with a heating and purification plant for the water.

Not far off, in Magazzini, you can see the Santo Stefano alle Trane Church, whose original architecture makes it one of the most fascinating Romanesque-Pisan buildings on the island. 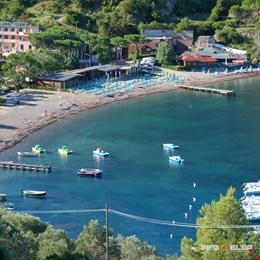 Where to stay near Portoferraio

Are you looking for a place to stay for your holiday in Portoferraio? Visit this page to see all accommodation available near Portoferraio

29 places to visit that can be seen on the map
The map has already been laid out at a zoom level that enables you to see all the points of interest.

CosmopoliFollowing the footsteps of Napoleon