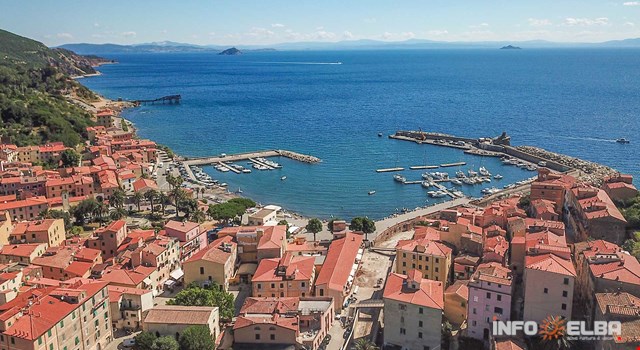 Rio Marina was once looked upon as the Iron Capital of the Island of Elba. The mines and the port in Rio Marina were used for extracting and transporting the iron mineral that, even today, with its sparkling reddish colour it is typical of more or less the whole town; it is everywhere, on the walls of the houses, on the beaches, and even on the sea bed.

All the old mines are on the eastern side of Elba, around Rio Marina and Capoliveri. Going from North to South you come across the Rio Albano mine that runs along the coastline from Cala del Telegrafo and Rio Albano to all of Monte Calendozio.

Here the minerals - mostly hematite and limonite - were extracted and worked on site as far back as the Etruscan and Roman times.

Near the last houses in the town there is the Rio Marina mine, where much hematite and pyrite

was found, that goes as far as Monte Giove.

The Ortano mine is at the foot of Monte Fico, north of the beach of Ortano. Here the pyrite they extracted was used for making sulphuric acid. Hedembergite and ilvaite crystals of an outstanding size have been found in this mine.

To the north east of Port Azzurro, as the crow flies, about a kilometre from eachother, there are the two mines of Terra Nera and Capo Bianco. Due to the long years of extracting pyrite, hematite and magnetite from the Terra Nera mine, this mine has now become a fresh water lake near the sea. Limonite was extracted from the Capo Bianco mine, so called because of the colour of its rocks .

In the Monte Calamita promontory, on the most southern part, we have the two mines of Punta Calamita and Punta Bianca, from where mostly magnetite was extracted.

Today these mines, after the last one closed in 1981, has given way to tourism, and Rio Marina has slowly turned into a flourishing seaside resort, and the buildings that were once part of the mines have been made into museums.

Inside the building that was once the Offices of the Mines we have the Museum of Minerals, Mining Art and the Historical Archive of the Mines of Elba, and in the museum the original areas of the mines have been recreated, as well as an important collection of samples of minerals and stones from the Island of Elba. You should also go and see the "Erisia Gennai Tonietti" Town Mineral Museum where there are more than 700 samples of unique beauty are on show.

Thehexagonal tower at the port is also particularly interesting from a historical point of view; Jacopo V Appiani had it built around the middle of the XVI century, while the original tower with its clock dates back to 1882, year when this marine Commune and the oratory of San Rocco built in 1570 were born.

The places in the Commune of Rio Marina are: Capo d'Arco, Ortano and Cavo. Cavo is a hamlet of Rio Marina, and is on the most northern part of the island, at the foot of Monte Grosso.

Interesting fact: There are two celebrations every year in Rio Marina: Saint Barbara, the Patron Saint, is celebrated on December 4th, and there are also several celebrations in honour of Saint Rocco of Montpellier on August 16th.
if you wish to know more about these celebrations just visit the www.elbaeventi.it web site 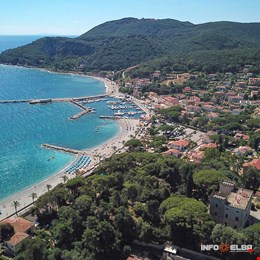 Cavo is a fully equipped beach resort, and the nearest place to the mainland.

Where to stay near Rio Marina

Are you looking for a place to stay for your holiday in Rio Marina? Visit this page to see all accommodation available near Rio Marina

5 places to visit that can be seen on the map
The map has already been laid out at a zoom level that enables you to see all the points of interest.