Rio nell'Elba: famous for its iron mines that date back to the Etruscan period 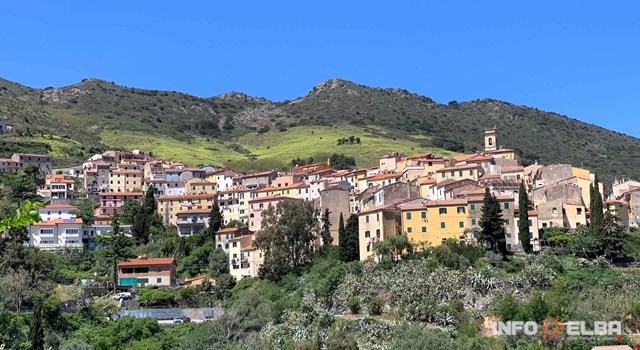 With origins dating back to the Bronze Age, Rio Elba is one of the oldest towns on the island, and traces of its past can still be seen today. Sitting up on a hill 180 metres above sea level, like all the other towns on the eastern side its past lies in the mining tradition now lost in the mists of time.

It is famous for its iron mines that go back as far as the Etruscan period, and was the island's mineral centre until the iron ores were finally closed down. There are many minerals on show in the Civic Museum of Archaeology of the Mining Area of Rio nell'Elba.

The museum is in the old part of Rio nell'Elba and there are over 700 pieces of the various types of minerals coming from all over the island. Geologically speaking, Elba can actually be divided into three sections. The western part, where Monte Capanne is, consists mainly of granites, tourmalines, beryls, serpentinites and porphyries. The central part is divided into East, where diabases and serpentenites come from, and West, where quartz porphyry, alberese and granite come from.

The eastern part, on the other hand, has a much more complex composition: the southern part with Monte Calamita, and the coastline between Porto Azzurro and Rio Marina is where Paleozoic mica schists, feldspar, quartz, tourmaline, marbles and dolomites come from; around Capoliveri there are porphyries and calcareous masses; the northern part is the richest in iron minerals like oligist, limonite and magnetite, and here you can also find ardesian and carbon schists, Permian arenite and pudding stones, and Mesozoic limestone. The last iron mine on the island was closed in October 1981.

Another interesting place from a historical point of view that you should go and see is the Saint Giacomo and Saint Quirico Parish Church, built in the XI century and destroyed by pirates only to be rebuilt more than once. Today the exterior part is Renaissance style while the interior is clearly baroque. There are several valuable paintings kept here, but the most important is thought to have been done by Giovanni from San Giovanni Valdarno (1592/1636) showing the mystic marriage of Santa Caterina of Alessandria. If you go to the right of the Church of Saint Giacomo and Saint Quirico and go to the end of the road you will get to the Church of Pietà that dates back to the XVI century.

There is also a small theatre - the Teatro Garibaldi - in Rio Elba that has been recently renovated, and is where the major, local cultural activities are held.

The old washhouse with its brass water holes that date back to the sixteenth century, are very interesting, as is also the Valle dei Muliniwhere there were once 22 of these holes that brought the water down from the springs to the washhouse; last but not least the Church of the souls where recently a group of volunteers set up a mechanical nativity scene showing what Rio and the mining activity was like in the past.

The [page id="259"]Casa del Parco di Rio nell'Elba[/page[ is in the area known as i Canali, and here you will find all the information you need concerning the beauty of the Tuscan Archipelago National Park.

On your way out of the town, along the road for Nisporto and Nisportino, you will see the Sanctuary of Santa Caterina, a tiny sanctuary dating back to the XVI century, and the Orto Elbano dei Semplici where you can admire a large number of typical plants that grow in Elba. Both are near "Grassera", a Medieval village that the Turkish pirates razed to the ground in 1500. Every Easter Monday, the saint day of Santa Caterina, the locals eat dried figs in her honour.

Equally fascinating are the Castle of Monte Giove on the way to Cavo, and the Volterraio Castle, at the top of Monte del Volterraio on the main road for Portoferraio; it is the only impregnable fortress that the Saracen pirates were unable to raid.

Interesting fact: The Patron Saint of Rio nell'Elba is San Giacomo. Every July 25th special events and exhibitions are held.
If you want to know more about them please visit the web site www.elbaeventi.it

Where to stay near Rio nell'Elba

Are you looking for a place to stay for your holiday in Rio nell'Elba? Visit this page to see all accommodation available near Rio nell'Elba

5 places to visit that can be seen on the map
The map has already been laid out at a zoom level that enables you to see all the points of interest.