The city planned by Cosimo I de' Medici

The old part of Portoferraio is a fortress that dates back to the sixteenth century and that Cosimo I de' Medici founded on top of the remains of Roman Fabricia and Medieval Ferraja for strategic and military reasons.

In the first half of the 1500s the Island of Elba was under the influence of the Republic of Florence, so the Grand Duchy Cosimo I de' Medici, fully aware of the strategic importance the island had in the Mediterranean, decided to build a new city to extend his duchy and protect the commercial traffic in the Tyrrhenian Sea. 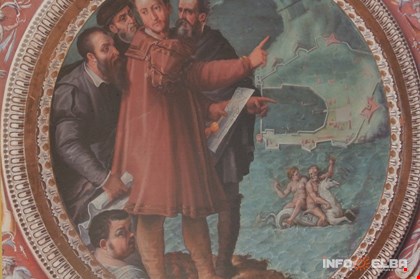 In an attempt to make his dream come true and build the city of Cosmopoli, Cosimo drew up a plan that he divided into two parts: occupy a strategic position in the natural port of Portoferraio with a powerful battlefield and build a fortified city therein.

In 1548, as soon as he was granted authorization on behalf of Carlo V to build a temporary fortress, he had many infantrymen arrive on the island, as well as builders and navvies, to defend the city, and with them Giovanni Battista the architect who, along with the experts Pirro Colonna and Otto di Montaguto, whose main task was that of taking care of the field work, took care of any military and defence questions.

The strategic need to build a fortress in the bay of the city came from the fact that there was always the risk of more attacks on behalf of Barbary pirates that in that period often attacked both the coasts of the Grand Duchy and those of Elba.

In order to build Cosmopoli, Cosimo hired the best architects: first Bellucci and later Giovanni Camerini and they both drew up the plans of palisades, embankments, walls and facades thus making Cosimo's city one of the safest ports in the Medirerranean.

The main work in the first steps of the fortification of the new city were: Forte Stella,the Linguella Tower and Forte Falcone all joined together by magnificent city walls in order to enclose the city and hence create one, single defense city. A moat filled with sea water was built on the western side in order to separate the fortress from the rest of Elba and was connected to the island city by a simple drawbridge. The moat that separated Cosmopoli from the rest of the island was filled at the start of the XX century. 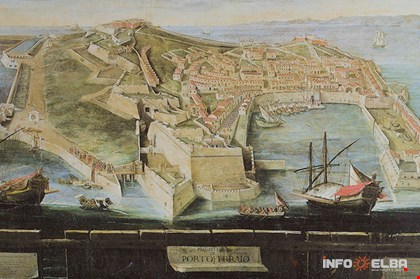 The city was protected on the western side by the major defense systems. The ramparts facing the land were built in the shape of a diamond because it was thought that an attack would come precisely from here so had a cannon was placed at the end of each point to enable firing towards any part of the surrounding areas. An important element was the Dock, originally the port closed off by an iron chain.

At the same time plans were drawn up for both the urban layout and the most important buildings.Everything had been planned after having studied the natural conformation of the area and the city that complied perfectly to the military needs of defense. Several water tanks were built underground should the attacks have lasted a long time.

In 1553 the defense structures in Cosmopoli were practically impregnable: while the pirate Dragut constantly raided the rest of the island, the city on the other hand became a place where the locals could seek safety and refuge.

In short Cosmopoli was like a large suit of armour on the sea so the living conditions of the locals who fled from the hills developed further because they could seek safety within the city walls. Around 1556 an edict was issued to encourage people to choose to live in the city: help, support and tax deductions were given to those who chose to do so. Many people came to live there, not only from elsewhere on the island but also from Tuscany, central Italy, Sicily, France and Greece.

The name Cosmopoli was soon replaced by the name Portoferraio which in some way referred to the old Roman name and the tradition of transporting iron. The city slowly gained more importance so was classed as a city rather than a suburb and from 1637 to 1751 it was home to the Grand Duchy's fleet.

In 1559 it was the seat of the Biscotteria, the place where biscuits were made and then dried, the long shaped biscuits that substituted bread on board the ships, and, when necessary ,was also for the locals. On the walls along the northern coast, already protected by the steep cliffs, four windmills for grinding flour for both the locals and the soldiers were set up, and the barns were nearby.

In 1575, based on a first project by Camerini and later one by Bernardo Buontalenti, the city and new fortifications were drawn up and a naval dockyard was built that today is what we know as the indoor market in Portoferraio; the galliasses, the Grand Duchy's warships, were kept here in the dockyard.

The foundation of Cosmopoliand his great capacity of how to expand were both extremely important  events for the Medicean duchy. New operas were later built by other Grand Dukes in the Medici family and then from 1744 under the Lorena government. Years later, when the French Empire collapsed, Portoferraio became the capital of the small kingdom granted to Napoleon Bonaparte.