The emperor chose the island of Elba for his exile

Not that he had much say in the matter, but our friend Napoleon had two choices as regards his exile: Elba or Corfu; he chose the former: 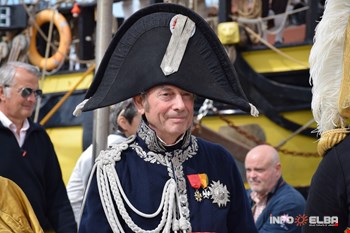 "My opting for the Island of Elba was based on two important factors: the pleasant customs of its inhabitants and its mild climate. I will dedicate much of my time studying them both" (p.38)

As soon as the news of Napoleon's imminent arrival got out, all the people in Portoferraio started getting very excited,

The Town Council, the Military Command, the Vice Prefecture, all the authorities and locals were in complete turmoil. [...] A full programme of festivities was written down, but unfortunately it couldn't be put into practice, [...] The initial enthusiasm ended up being nothing more than high stacked bonfires and one or two "flags" at the end of long canes held by some youngsters who ran up and down the streets shouting at the top of their voice. The idea was to put decorations along the streets, and non existing flags and drapes in the squares and bastions; and also to build a Triumph Arch; although the triumph might have been posible the arch certainly wasn't! (pp.26-27)

Napoleon arrived in the harbour of Portoferraio on May 3rd 1814 aboard the "Undaunted" frigate, but because he wasn't sure what kind of welcome he would have received from the Elba locals he didn't get off until the following day, first, in a very private way in Magazzini, then in an official way at Molo Elba, at 15.30 on May 4th 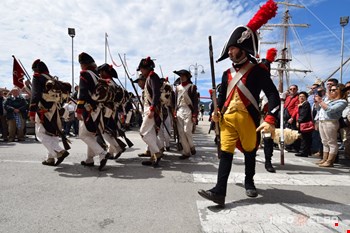 Surrounded by an enthusistic crowd, the Mayor Traditi handed the keys of the city over to him, or rather, those of his cellar made golden by using purpurin, since real ones didn't exist.

With a solemn line of people behind him, he crossed the Granguardia Square, via S. Giovanni and Piazza d'Armi (that are now Piazza Cavour and Piazza della Repubblica), then headed for the parish church (now the Dome) where, after days and days of frenetical trials and cleaning, the Te Deum was celebrated.

He then went for a rest in the Palazzo Municipale where all the preparations for his stay had already been made.

The arrival in Elba