Contrary to what people believe, Napoleon did not flee from Elba

Of the many versions as to why Napoleon left Elba, many maintain the party the evening before was simply an excuse to enable him to sneak away down a stairway on the cliff of the Palazzina dei Mulini built specifically for this reason.

The truth is the Emperor didn't sneak away from Elba. Preparations for his departure had already been started days before: the Inconstant had been loaded with food, repaired, rearmed, repainted and was ready to set sail.

The preparations for his escape were complete by the middle of February, and were so obvious that even a blind person would have seen them, even the stupidest person would have understood what was happening.[...]

Do you really believe Campbell hadn't noticed all the bustling about. To be honest one young man had asked some questions[...]

The Emperor reassured him:
- Nonsense, imagination, Colonel; I like Elba so much I wouldn't leave it for all the money in the world! 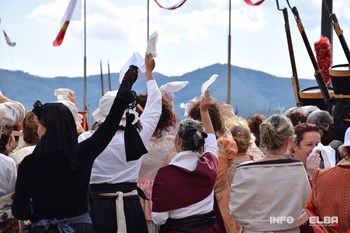 On February 26th, at 4 o'clock in the afternoon everything was ready for the departure:

A hug, a kiss and Napoleon's off for fear of someone noticing his sadness. Nobody says anything. He walks away, looking back more than once at the Palazzina dei Mulini where Letizia and Paolina wipe the tears from their eyes, then crosses Via Ferrandini, goes down the "Pompone" steps, Granguardia Square, then reaches Porta a Mare that leads on to Punta del Gallo. He leaves from where he had arrived. A crowd of people are there waiting for him.

[...] The Emperor has to force his way through the crowd to get to the ship. Everybody wants to kiss his clothes or his hands, or touch him, caress him. It's pandemonium. But in all this confusion, with the sound of the weapons beating against eachother, not one word is said: the only sound is that of the beat of their hearts.

- I will be back my fellow men; I entrust my daughter and my sister to you!

These were his last words, as he got onto the dinghy that was to take him to the Inconstant, between the Gallo and the Martello Tower.

Everybody knows what happened to Napoleon after he left Elba: the battle of Waterloo, his exile in Sant'Elena, his illness and his death. His last words on his death bed are known by many: "It was six years ago" he said sadly -,exactly, when I arrived in Elba. It was raining. If only I could hear that rain again I would get better" (p.59) Napoleon Bonaparte dies on May 5th 1821.

Every year, on May 5th, in the Reverenda Misericordia Church in Portoferraioa mass is held to pray for Napoleon's soul, and for the whole month there are historical revocations, conferences and celebrations in memory of Napoleon's sovereignty on the Island of Elba.