Napoleon's first night in Elba was anything but pleasant: the building was mediocre and the people celebrating out in the streets made too much noise, so the following morning as soon as he got up he went in search of somewhere quieter and more fitting for an emperor.

Infoelba advice: in the part about the museums in Elba you will find all you need to know about the Villa dei Mulini and the Villa di San Martino. 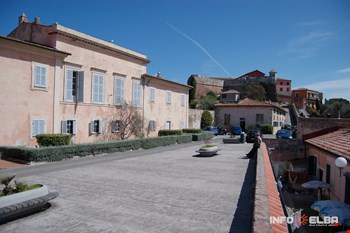 As he studied the city of Cosmopli (the name Cosimo de' Medici had given to Portoferraio) in every detail, Napoleon eventually found just what he was looking for: the [page id="256"Palazzina dei Mulini[/page], standing where there used to be four windmills (hence the name), between Forte Falcone and Forte della Stella, up on the cliffs facing the mainland. Sandro Foresi tells us about the origins of this building:

In 1724, on request of the Gand Duke Gian Gastone de' Medici, a small house complete with water cistern was built in Mulini for the Governor's gardener who at the time lived in Forte Stella. The Grand Duke also gave orders for the civil prison to be built next to the house, as well as another house for the Judge who, in 1736, became a Hearing Officer of the Government. In 1787 it was made bigger and divided into two parts: one for the artillery commander and the other for the other commander.

When Napoleon arrived, the very simple house in Mulini, although nothing special, was probably the best house in Cosmopoli. It consisted of two, small houses on two floors, with an inter communicating landing on the ground floor, where the garrison soldiers were stationed. [...] The first thing the emperor did was to have the landing raised to the level of the first floor where the two bedrooms were so as to have a spacious room for receiving guests. He then had the barn next to the house turned into a theatre.

Then he had the original houses pulled down and the long "Pavilion" used by the military personnel lowered to the level of the small square opposite the "Building" so the view would be clear. The prison was turned into stables.

The emperor would have had much more done if he hadn't been short of money. The Villa dei Mulini is in one of the most beautiful parts of Portoferraio, between Forte Falcone and Forte Stella. He had a veranda looking out on to the Piombino Channel built so he could see the ships with his mother and sister aboard. Unfortunately he awaited his beloved in vain! On the pavement outside, opposite the main doors on the ground floor inside the building you can see the Emperor's horse's hoofprint.

About a week after his arrival, Napoleon left the Town Buildings and went to encamp in the beautiful garden of the Palazzina dei Mulini, where the rennovations were coming along fast. They say the Emperor hardly ever slept in his bedroom: his real paradise was the garden where he spent hours on end giving orders, studying the sea, and preparing for his next victory.