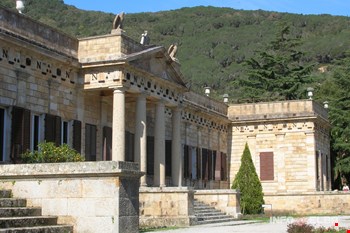 One day while Napoleon was out horseriding, something he loved doing every day, he arrived at the San Martino valley. Here, he was so impressed by the lush woods, the vineyards and a small house that looked out onto the entire gulf of Portoferraio that he decided there and then he wanted to buy the Villa and use it as his summer residence and love nest. He asked his sister Paolina to lend him the money, so to please him she sold some of her most precious jewellery.

The Emperor Vincenzo Foresi, an expert business man, was given the job of negotiating the purchase. After various negotiations, the outstanding price of 41.539 francs was agreed upon for both the house and the grounds next to it. The owner, Manganaro, was a sly man, so he asked for a higher price because he knew Napoleon was so struck by the beauty of the place that he would have paid any price at all. "San Martino was to be his "love nest" to be shared with Maria Luisa whose arrival he eagerly awaited. (pp.74-75)

Maria Luisa never quite managed to join up with the Emperor in Elba, though, they do say the country air in San Martino never left Napoleon short of the joys of love:

People say that in a country house in San Martino Napoleon got to know Sbarra, a planter's daughter. Of creole origins she was somewhat bold, bright and sensitive, not your typical woman from Elba. She strongly reminded Napoleon of his first love, a girl from Colombier, so he liked chatting to her. One day he found out a member of her family, with the best of intentions, wanted to court her, so he summoned him and convinced him to marry her; the man made such a good impression on Napoleon that he later helped him reach a better position in life.

The Emperor even gave Sbarra a dowry, and loved her as a father, and, just as he had done with the girl from Colombier he spent many happy hours eating cherries with her.(105)

According to many elderly locals, cherries were not normally grown on the Island...

Suggestion from Infoelba: in the part about museums in Elba you will find all you need to know about the Villa in Mulini and the Villa in San Martino .

The Villa in San Martino