“Schiacciunta” from the Island of Elba

Schiacciunta is a typical biscuit type of cake from Poggio and Marciana, the two towns on the highest part of Elba, and is usually made with lard (thanks to the woodcutters and coalmen who used to come over for the woodcutting season from the mainland because they explained how to use the lard).

It is a typical winter cake that is usually served with the Elba DOCG Moscato Passito or Aleatico wine, but it is a good cake to make at any time of the year. In summer, for example, if you fancy a fresh, crunchy dessert just crumble some over your ice cream. 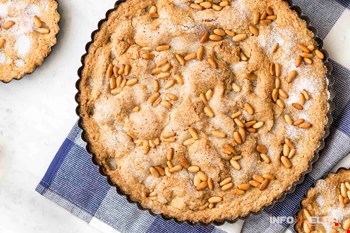 Mix the eggs, the sugar, the lard, the yeast and the lemon rind in a bowl. Contrary to what many people believe, this is better done by hand rather than with an electric mixer because

the heat from your hands not only helps to soften the lard but also adds more air to the mixture and makes it easier to mix in the flour, which must be done gradually so that the dough becomes smooth and well blended.

Grease and flour a rectangular tin and pour in the mixture. In Poggio years ago the tradition used to be to press thimbles or wedding rings on the top of the dough to make circle shapes.

Put in the oven at 180° for about 45 minutes and sprinkle with sugar before serving.