The recipe for "Penne in Barca" was invented by Elbano Benassi, a chef from Portoferraio who was also the first, post war communist mayor, and who can be considered a pioneer in the world of tourism when he decided to open his restaurant called "Da Elbano" where two of his specialities fish that had just been caught and boiled octobus, aways washed down with a "quartino di vino", that is, quarter litre of wine.

As well as preparing and cooking traditional dishes, Elbano loved using his imagination, blending traditional ingredients with new ones, to create new recipes: one of these are his world famous "Penne in Barca".

Don't forget that the original recipe requires bechamel sauce and not cream! 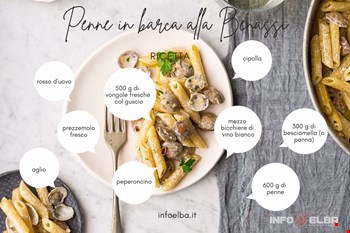 Wash the clams under fresh, running water then leave in salted water to get rid of any sand and leave aside. Chop the onion, garlic and chilli pepper and fry gently in a little oil until golden, then add clams. Add white wine and turn up heat so the alcohol evaporates/p>

. Once all the shells have opened turn off gas, add the cooked "penne" and mix gently. Add the bechamel sauce (or cream), sprinkle the chopped parsely and serve.

If you prefer, you can also add an egg yolk before serving, making sure you don't "cook" it.