You will be mesmerized by the unbelievable variety of colours and different types of beaches on the Island of Elba.

Their uniqueness is worldwide, precisely because Elba is unique thanks to not only its geological complexity but also the many different types of natural, geological environments that are all however closely connected to one another: formations, rocks and minerals the island has been made up of for thousands of years

This incredible geological uniqueness is even more important if we bear in mind that all this occurs in an area of just a few kilometres since the territory of the Island of Elba covers a coastal area of only 147 km so hence can be considered relatively small.

In our "The beaches on the Island of Elba" guide book you will see we have chosen to classify the beaches into six different colours plus four different categories; in actual fact the number of different hues of the sand, the shingle, the pebbles and the cliffs that you will see is much higher!

How can you explain this exceptional geodiversity that only Elba has?

The geological history of the island is millions of years old and, even today, it is very closely linked to the evolution of the northern Appenines.

If we read about Elba's geological origins and study a geological map we realise just how important these territorial differences are.

There are three major different types of rocks to be found on the island, magmatic, metaphoric and sedimentary, and they exist side by side according to complex relationships that have been studied very closely by important geologists from the nineteenth and twentieth centuries to the point that in 2015 the New Geological Map of the Island of Elba was published. 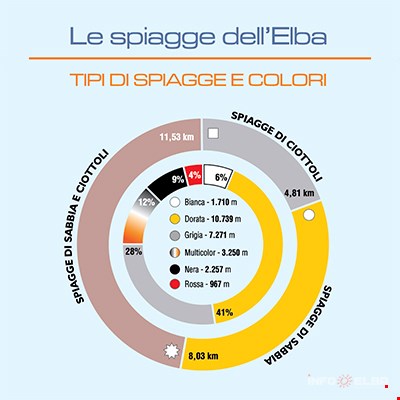 This means that we can more or less divide the island into three different lithological areas:

Thanks to the type of rocks we can better understand both why the environment is as it is as well as why the surface is as it is; not only that, we can also see why the aspects and the grain size and colourful products of natural disintegration, that is pebbles and sand, make up the beaches on the island.

The result of this thousand year old game of the minerals is a rainbow of different colours and types of beaches that are made up of white Aplite tourmaline with blue-black speckles like the white beaches in Portoferraio, course grain sand consisting of a granite composition to be found on the central western beaches, or the beaches that are made up of sand mixed with pebbles: sand, pebbles and colourful shingle that have come from sedimentary rocks to the east, fine grain, dark hematite sand or red rocks and also the mineral based beaches on the eastern coast.

You can choose to sunbathe on a different type of beach on the Island of Elba every day of your holiday and at the same time admire the unique and beathtaking scenery that will make your holiday unforgettable.