Weddings with a religious ritual

A religious wedding is a sacrament, an unbreakable promise that the bride and groom make before God.

Catholic Church weddings are normally held in the parish church of the town where the bride comes from but over time things have changed and now more and more weddings are held where the couple fell in love, the place that they feel particularly close to or where, for example, they had an unforgettable holiday full of happy memories and rich in emotions.

On the Island of Elba there is a wide variety of antique and modern churches, that can be simple or stately, churchyards and sanctuaries, some in tiny, seaside towns or in the heart of the country, and any of them will be perfect for your wedding. In the centre of the old part of Portoferraio you can choose from the Dome, stately and impressive, or the antique Church of the Misericordia, truly fascinating thanks to the beauty of the baroque style of the interior design.

In the lower part of Napoleon's Stairway you will see the Church of the SS. Sacramento; it is spacious but at the same time intimate and the 14 large, crystal chandeliers inside give it a suggestive and majestic look.

Not far from Portoferraio just below the Castle of Volterraio the tiny Church of Santo Stefano alle Trane stands out at the top of a hill in the country, and is one of the best examples of Romanesque architecture on the island; from here the view is truly wonderful; 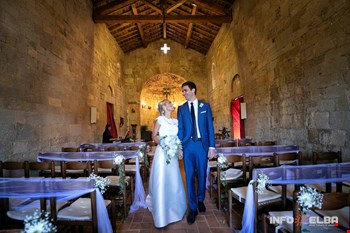 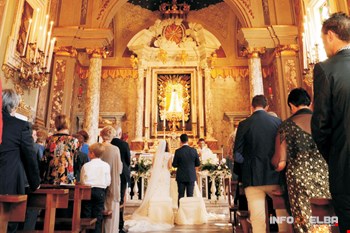 In Poggio, in the Municipality of Marciana, you will find the Church of San Niccolò that although outside seems very humble, the inside reveals a true baroque style. The churchyard with its uneven steps, the view from here that goes across from the tiny, paved square towards the chestnut valley with the town of Marciana at the top.

Deep in the heart of the century-old chestnut trees at the foot of Monte Giove lies Marciana, and the Sanctuary of the Madonna del Monte is truly fascinating and very suggestive, also because the only way to get there is past the shrines of the Via Crucis.

If you go down towards Marciana Marina you will see the Church of Santa Chiara, dating back to 1776, and is in the main square of the town; it also has a pipe organ, dating back to 1829, inside. The altars are dedicated to the Madonna del Rosario, to the souls of Purgatory and to the Holy Crucifix that looks over the Crucifixion. The high altar is in marble and cyborium with cherub drawings.In Marina di Campo we have the parish church of San Gaetano and the tiny Church of San Gaetano at the port where you can see a beautiful painting done by Andrea Casolani that was donated by the Grand Duchy of Tuscany Leopoldo II°. It shows the sweet expression on the Madonna's face as she looks at her young Son with his fair, curly hair.

Not far from the tiny church of San Gaetano you will see a wide, granite staircase that leads to the Watchtower of defence, built at the end of 1500, from where you can admire the gulf of Campo with its golden sands beach.

Of the numerous beautiful churches in the Municipality of Campo we can't ignore the Church of San'Ilario, the heart and core of this tiny, hillside town. Special mention must also go to the Church of San Nicolò in San Piero, within the ancient fortifications and sitting on a breathtaking viewpoint overlooking the gulf of Campo.

On the eastern side of Elba, the Sanctuary of the Madonna delle Grazie, in Capoliveri, is like a tiny, precious work of art with the entire ceiling painted with frescoes done by the artist Eugenio Allori from Elba as is the high, stone altar done in pink marble and onyx. In Lacona on the other hand, again in the Municipality of Capoliveri, we find the tiny Church of the Madonna della Neve.

High on the hill above Porto Azzurro, amidst pinkish hills and aloe plants, we can see the Sanctuary of the Madonna of Monserrato. In the centre of the town on the other hand we have the Church of the Madonna del Carmine and, next to it, the Chapel of the Sacred Heart of Maria.

In Rio nell’Elba you have the Church of San Giacomo e Quirico and inside you can admire the seventeenth century piece of work showing the mystic Wedding of Santa Caterina, probably done by Giovanni from San Giovanni, as well as marble tombstones of famous people from Piombino and also many holy pieces of silverware. Both the Church of Santa Barbara and that of San Rocco are the most representative places of worship in Rio Marina. The latter was built by the arisocrats of Piombino in the second half of the XVI century with the aim of providing a place to pray for the miners who came to work on the island..

If you entrust a wedding planner like Rossella Celebrini if you want a fully qualified expert who will know how to plan and run your special day as well as meeting the needs and wishes of the bride and groom and at the same time being creative and original.

Weddings in historical placesGetting married on the beachWeddings in private buildings

Say I Do wedding insurance