Beaches with facilities for dogs and their owners 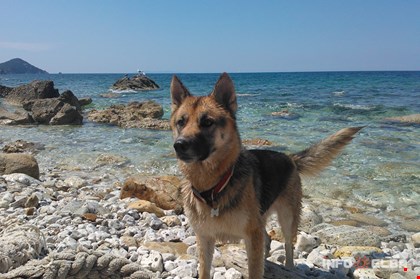 Elba, therefore, is ahead of its time as regards animal rights.

According to this law, each Commune is free to enforce the law as required, so for this reason the rules and regulations as regards the beaches where dogs are allowed may differ from one Commune to another.

It goes without saying that on all the beaches on the Island other people must be respected at all times, so keep your dog on a leash and (when necessary) make him wear his muzzle, and, as stated by the Ministry of Health law of August 6th 2013, cleanliness must always be a priority " so you are obliged to clean up if and when your dog fouls in any way in any public area".

The Commune of Capoliveri

With the law number 153 of 2016 the rules and regulations have been confirmed in greater detail, especially those concerning swimming in the sea; pets are allowed in the water only before 9.00 in the morrning and after 7.00 p.m.

The law number 11 of the 03th July 2019 in force every year in the period June 1st – September 30th states that all dogs are allowed on the beaches in the Commune even during the day. The law also states that dogs are allowed on the beach in the area right opposite the water's adge from 7.00 p.m. to 7.00 a.m.. An exception is made for the following: first aid lifeguard dogs, guide dogs for the blind, police dogs, dogs trained for saving lives at sea, but they must have the life guard certificate.

Rules and regulations concerning of 11/2017: throughout the entire summer season (May 1st - September 30th, ever year), dogs are allowed only on the specially equipped part of the beach in Mola and on the beach opposite the Terranera lake.

On all the other free beaches dogs are not allowed,with the exception of guide dogs or certified lifeguard dogs, that must always be kept on a leash and wear their special coats, be fully vaccinated and covered for insurance. No animals may be taken into the water.

As long as the owners of some bathing establishments have informed the Commune beforehand, on request they may allow dogs as long as their owner is with them (only one dog per owner).

On the other hand, every year, from Ocober 1st to April 30th dogs are allowed on the free areas of the beaches as long as they are kept on a leash and have their muzzle on.

At the moment the previous rules and regulations that the ex Communes of Rio nell'Elba and Rio Marina are still in force. With the specific law num. 22 of the 19/06/2014 the Rio nell'Elba Town Council has decided to allow dogs on a specific part of Nisporto beach, about 50 metres long, from June 1st to September 30th.

Beach where dogs are allowed on the eastern side of Elba: beach equipped for dogs on the island of Elba

Region of Tuscany Law for the protection of animals

Elba Spiagge, Elba Traghetti and Elba Eventi on smartphones and tabletsBeaches with a car park

Bathing establishmentsSheltered beaches depending on the wind

Elba with my petVets and their availability