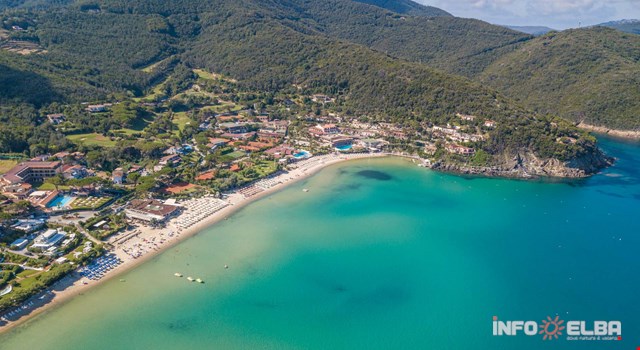 Coming from Portoferraio, half way along the road for Procchio (in the area called Capannone), it's impossible not to notice one of the most enchanting and best known gulfs in Elba: this is Biodola.

The beach consists of a natural amphitheatre made up of the surrounding hills of Serone delle Cime, Capannone and Colle Pecorara, all covered in a copse wood of Mediterranean bush that, along with Monte Perone and Monte Capanne (1019 m) in the background stand out against the sea.

It is exposed to the north-western winds but sheltered from those from the south.

Right in the heart of Elba's nature, Biodola beach can be described as a an absolutely beautiful painting: six hundred metres of fine, golden sand, Mediterranean scrub that goes right down to the beach, beautiful hotels and a campsite right next to the beach.

The shallow water of the turquoise sea means you can wade till far out and this makes the beach very popular also among families with small children who can play safely on the shore with their bucket and spade.

There are several facilities on the beach, and this makes it very popular with teenagers too.

There are also several hotels as well as numerous bars, restaurants and you can hire pedalos too: on relaxing, summer days this is the perfect way to go and discover the magnificent coastline nearby.

In some areas you can hire sunbeds and beach umbrellas but they are usually run by private bathing establishments. You can go water skiing, scuba diving and surfing.

The beach takes its name from rush that grew along the dunes in the area, and you can get to it by walking along the rocks from the nearby Scaglieri beach,whose characteristics are very similar to those to be found in Biodola.

To the left of the beach is the start of the beatiful "Fitness Track" and as you go along the coast through tiny tunnels in the heart of the Mediterranean bush you will first get to the two tiny, pristine beaches of Lamaia and Porticciolo and then on to Procchio.

How to get to Biodola beach

Take the road from Portoferraio to Procchio then turn right at the junction and follow the road down for about 2 kilometres.

Since August is the peak month you will very likely be forced to park your car at the side of the road - in some parts widened specifically for this purpose - maybe even more than a hundred metres from the beach. Be careful not to leave your car sticking out! You are allowed a short stop just off the beach to unload and let your passengers out the car.

There is also a urban bus service to and from Portoferraio[/page].

10 structures near the beach of Biodola see on map

Farm holiday centres near the beach of Biodola

Apartaments near the beach of Biodola

Campsites near the beach of Biodola

Diving Schools near the beach of Biodola

Hotels near the beach of Biodola