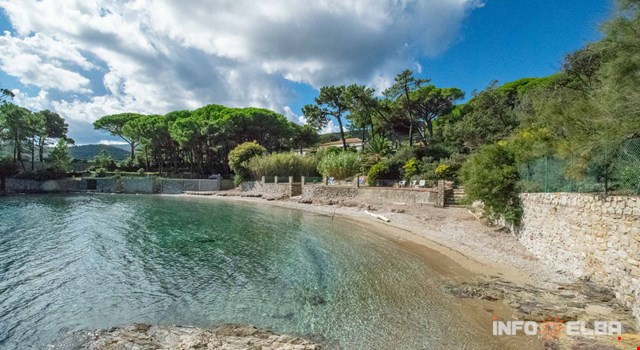 Cala delle Alghe (also called Cala dell'Alga) sits in a tiny gulf to the north of Cavo beach. The cove is truly beautiful and rewards you with a breathtaking view of the entire gulf of Piombino and the tiny islands of Cerboli and Palmaiola.

This tiny, very narrow cove is somewhat rugged and totally pristine, and consists of sand mixed with shingle, and, as the name suggests, the part that is farther from the water's edge is covered in seaweed.

Towards the northern part an area of large rocks cuts it off from the rest of the beach making it seem much, much smaller. These sharp, rough rocks are interesting from a geological point of view and make the entire coastline even more fascinating, and are very popular among those who enjoy diving off them or want to go snorkelling.

Cala delle Alghe beach lies well sheltered inside the gulf so only gets winds coming from the east, and this means that the water is always calm and crystal clear .Although no facilities are available on the beach itself - you will easily find them in the nearby town of Cavo - the beach is perfect for children.

The fact that the water is shallow till far out plus the position of the rocks at either end of the beach and the crystal clear sea  mean that the beach is perfect for both scuba diving and snorkelling lovers.

The northern part is sheltered by the Capo Castello promontory, the area that became famous when the remains of the Roman Villa of Capo Castello and the terracings dating back to the Imperial times were found.

Cala delle Alghe, secluded and very peaceful is looked upon as a place of refuge by the people from Cavo because the beach is quite hidden and there are hardly any signposts to tell you how to get there.

How to get to Cala delle Alghe beach

Although the beach is practically inside the town of Cavo there are very few signposts so finding it isn't very easy. Start off at the promenade in Cavo, go along Via Bernardo Procchi and past the built up area then turn right into Via Capo Castello. Keep going for about another two hundred metres than turn right and go down a narrow stairway until you get to the cove.

Campsites near the beach of Cala delle Alghe