Sea, sun and relaxation on the western side of Elba 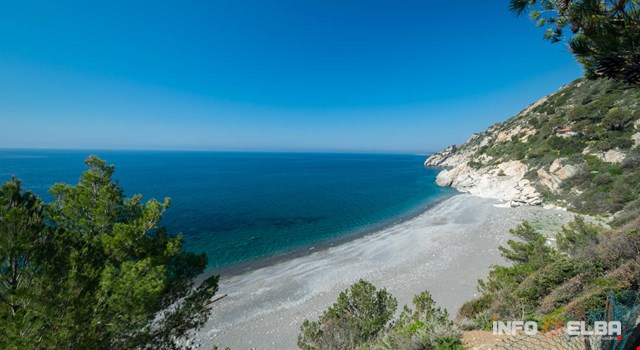 Suggestive and pristine, these are the words that best describe Colle Palombaia beach,
It is sometimes called Colombaia, and since you have to go down and up more than a hundred granite steps to get to and from the beach, more often than not it is called the Beach of A Hundred Steps.

It can be described as an enchanting paradise , and even during peak season when most beaches are mobbed you can be sure of a peaceful and relaxing day, far from the typical hustle and bustle of the busier beaches.

It's quite wide and is about 300 metres long, and consists of pebbles mixed with sand. There are steep cliffs are on both sides - Cavoli to the west and Capo Poro to the east.

The rugged nature and the unique colours of the water make you just want to go and relax there.

Since it is sheltered from winds from the north it is very nice even in low season.

The beach has been granted a "Punto Blu" establishment so beach umbrellas and sun beds can be hired here.

The crystal clear water and the nearby cliffs make the entire area perfect for snorkelling lovers.

How to get to the beach

Since it is only a few kilometres from Marina di Campo , just follow the western ring road in the direction of Cavoli; about 2,5 km further along, go past the junction for San Piero-Sant'Ilario, and you will see a spacious, grit car park.

On your left just a few metres further along you will see a signpost for access to the beach, and that is exactly where the steps start.

If you prefer, you can park your car a few metres further along from the sign for the beach in the space at the side of the road that has been made wider specifically for this reason.

2 structures near the beach of Colle Palombaia see on map

Apartaments near the beach of Colle Palombaia

Hotels near the beach of Colle Palombaia