Crystal clear sea and enchanting sunsets in a legendary place 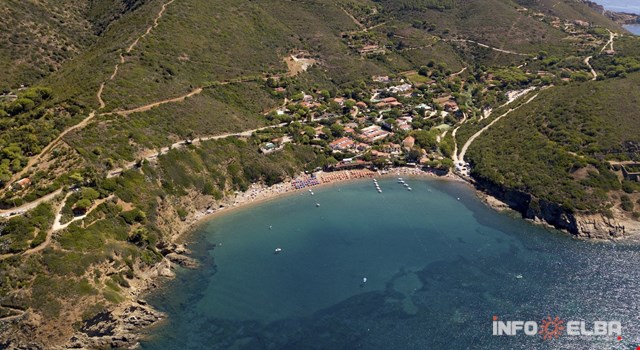 Innamorata is the last beach on the southern side of Monte Calamita (Capoliveri) with bathing establishments. In the past its name was Cala de lo ferro and is on the outskirts of the area where the old iron mines , are, in one of the most rugged and pristine areas of the Island of Elba.

It consists mainly of sand and shingle, and is in a truly beautiful setting; the nearby Gemini islands are a much loved destination for easy excursions on canoes or pedalos or even if you want to swim out to them. Thanks to their beautiful sand bed that is rich in marine fauna, these two tiny islands are also very popular among snorkelling lovers.

Half the beach is taken up by bathing establishments while the other half is free; besides this there are numerous facilities as well as bars and restaurants.

To the left of the beach you can see the tiny Punte delle Ciarpe beach right opposite the Gemini islands, and you can still see traces of the mining industry surrounded by Mediterranean bush. There is also a hidden cove nearpunta di Pareti (to the right of Innamorata).

From the beach the view of the horizon stretches as far as the Island of Montecristo, the promontories of Capo di Stella, Fonza and Capo Poro. In the evening the sunsets over Monte Capanne are breathtaking.

In the romantic Innamorata Cove, as though watched over by the tiny Gemini islands, as well as crystal clear water and enchanting and unique sunsets, every July 14th you can also watch the commemoration of the famous legend of the two lovers: that of Lorenzo and Maria, that goes back to 1534. A magnificent torchlight procession takes place, with the participants dressed in sixteenth century costumes.

According to the legend, the young betrothed girl (the Innamorata, girl in love, hence the name of the beach), in an attempt to save her future husband who had been kidnapped and dragged on to a ship by Barbarossa's pirates, jumped into the sea only to be swallowed up by the waves. Only her shawl was found on a rock, since then called the Ciarpa (scarf).

How to get to Innamorata beach

9 structures near the beach of Innamorata see on map

Apartaments near the beach of Innamorata

Small villas and detached houses near the beach of Innamorata

Hotels near the beach of Innamorata

Residences near the beach of Innamorata