Dark shingle beach, sheltered by a pine grove behind it 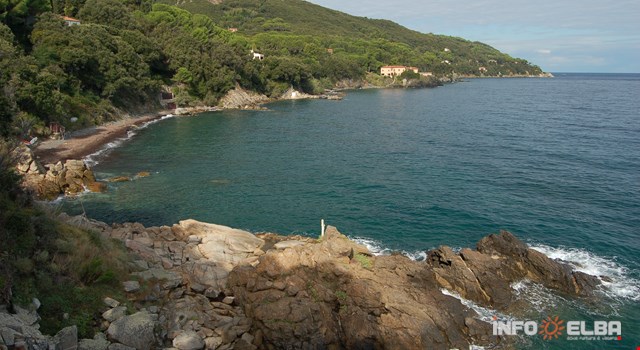 On the road from Procchio to Marciana Marina you get to Le Sprizze beach that sits in the area bearing the same name.

It is a rugged and pristinebeach that gets the sun from morning to early afternoon. It consists of small/medium size dark, almost black shingle.

The beach is really two tiny beaches that are separated by rocks, the first measuring only a few square metres and the second much bigger.

Depending on the current you often find a lot of posidonia on the beach.

On the right hand side of the beach there is a small number of rocks that you can lie on and enjoy the view that stretches from the Enfola promontory to the Guardiola one, that is, from the gulf of Viticcio as far as Punta dello Schioppo on the left.

Behind the beach there is a wood consisting of pine trees and holm oaksthat goes right round the coast, and this keeps the beach cool even when the sun is at its hottest.

The magnificent sea bed is perfect for going snorkelling.

It offers neither access for the disabled nor any type of bathing establishment.

When you get to the area that separates Le Sprizze from Bagno beach some small, man made rocks separate it from another three tiny beaches that are very near.

How to get to the beach

The beach is about 3,5 km past Procchio on the road from Procchio to Marciana Marina, just past the beaches of Paolina and Redinoce.

If you want to get to this beach be prepared to park along the side of the road, width permitting.

You then go down a path that is clearly signposted, beautiful but also steep and often discontinuous, that has been made out of large granite stones, that runs in the shade of a small heather wood, with terracing on either side dating back to years ago when every square metre of land was cultivated.