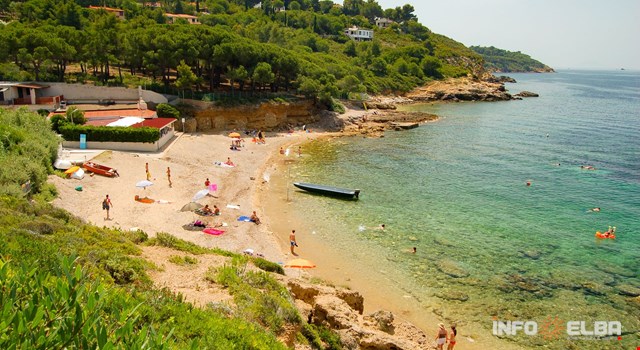 This tiny and very beautiful beach sits at the end of the valley where the Sanctuary of the Madonna delle Grazie is, hence the name.

The gorge consists of sand mixed with shingle, and the beauty of the vegetation all around is truly suggestive.

Rocks separate the main beach from a smaller one on the right, and this one is slightly more sheltered.

To the south there is another part that consists of sand mixed with shingle, separated by a unique rocky conformation known as the "panchina": a sort of rocky sedimentation consisting of a mineral similar to tuff.

The rocks on either side of the beach aren't very smooth so if you want to walk on them you will need to have some sort of footwear.

You will also notice some grottos in the rocks around the beach, that were carved out by the fishermen and used as hiding places for their boats or, according to tradition, by the monks who came from Montecristo.

The cliffs at the end of the beach plus the rocky sea bed are the perfect hiding place for many different species of fish, octopus and crabs so this makes the beach the ideal place if you want to go snorkelling or do deep sea diving.

There is both a bar/restaurant and a diving school on the beach.

Since it is in a south-west position it gets the sun until late afternoon, so this means you can admire some breathtaking sunsets. The view goes as far as Golfo Stella with Monte Capanne and the Island of Pianosa on the horizon.

The beach is sheltered from the winds from the north-east and east.

There is a 100 metre long path behind the Madonna delle Grazie beach and a scuba diving school beside it; follow the path and it gets you to Maretto, a tiny beach hidden between the rocks where there are several very suggestive, natural swimming pools.

Infoelba advice: If you turn off about 200 metres before the end of the road that leads to the beach you will get to the tiny, 16th century Sanctuary of the Madonna delle Grazie. Inside the Sanctuary, built in the XVl century, you will see the "Madonna del Silenzio" small oil painting (45x56cm), by Marcello Venusti, a copy of the one painted by Michelangelo, in the middle of the High Altar.

How to get to the Madonna delle Grazie beach

The beach is easy to get to from the road that goes from Capoliveri to Innamorata, just turn right at the junction before Morcone

There are some free, parking spaces at the side of the road behind the beach.

In summer there is also a shuttle bus service run by the Commune of Capoliveri.

Apartaments near the beach of Madonna delle Grazie

it is a proposal of Agenzia Viaggi Ideamare

Residences near the beach of Madonna delle Grazie

Villas near the beach of Madonna delle Grazie