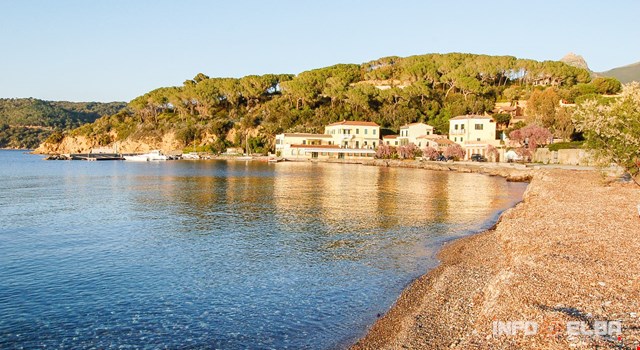 Magazzini beach is on the south-eastern side of the gulf of Portoferraio, right opposite what is considered the major town of the island.

The beach stretches for a few hundred metres from Schiopparello-Le Prade beach as far as the tiny sea hamlet of Magazzini, where in the past the salt from the nearby salt mines in Schiopparello as well as the agricultural products from the surrounding countryside were loaded for shipment.

The beach consists of shingle mixed with sand, and on days when a southern wind is blowing the water is even more crystal clear , and is shallow till quite far out so you can clearly see the sea bed covered in posidonia.

There is a tiny harbour on the right hand side of the beach that although being far from big is safe for mooring: the harbour is privately owned so you can moor your boat in complete safety both in summer and in winter.

A row of tamarinds that have been bent by the wind grow behind the beach, so here you can cool off in the shade during the hot months.

On Magazzini beach as well as a bar/restaurant, a sailing school and a diving centre and you can also hire a boat.

The view from the beach is beautiful and stretches as far as the skyline of Portoferraio, while to the right you have the majestic Castle of Volterraio.

It is mainly locals who live in the area who go to this beach, especially families with small children.

How to get to Magazzini beach

Take the main road from Portoferraio in the direction of Bagnaia and after about 8 km you will see a sign on your left for the tiny hamlet of Magazzini and the beach. There is plenty of room to park your car in the open space just behind the beach.

5 structures near the beach of Magazzini see on map

Campsites near the beach of Magazzini

Excursion guides near the beach of Magazzini

Hotels near the beach of Magazzini

Residences near the beach of Magazzini