Small beach next to the town of Marciana Marina 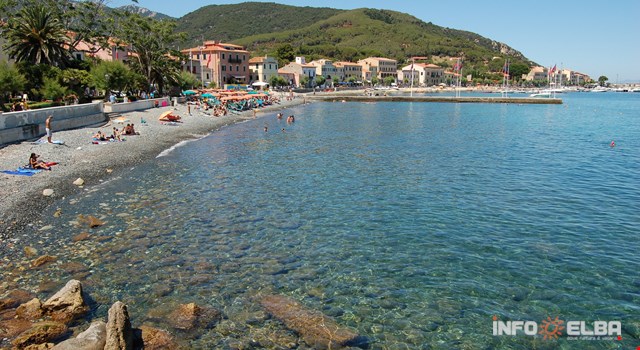 The beach in Marciana Marina is on the sea front of the town. Because it is in a northern position it is normally quite cool and quiet

The beach is very handy for those staying in the town and want to get there on foot; not only that, both on the sea front and in the town itself you have all the facilities you may need as well as shops, bars and ice cream parlours.

There is a pier halfway along the beach where ferries to the Elviscott shipwreck (in Pomonte), the Island of Capraia, San Vincenzo and Corsica leave on daily excursions. The pier is also very popular among children who love to dive into the water from here.

The beach is about 350 metres long and is wider on the eastern side and narrower in the part after the pier. The first part is mostly small, dark coloured shingle mixed with sand.

It is very popular among families with small children and has a bathing establishment with sun beds, sun umbrellas, canoe and pedalo rental. There is also a small park at the back of the beach if you want to cool off a little when the sun is at its hottest.

The part of the beach that is past the pier (especially at the far end, known as Capitanino beach) consists of sand The beach is very popular among families with small children because on it there is a Punto Blu here.

Nearby there is also a bathing establishment with sun bed and sun umbrella rental, as well as three boat and dinghy rentals.

How to get to Marciana Marina beach

It is very easy to get to because it is right on the sea front, and here there are also several car parks at an hourly cost, while at the back of the town there are free car parks that are within walking distance. If you are coming from Procchio you will see the three storey car park (the storey next to the road is free) as soon as you come into the town, while the San Pietro car park is on the opposite side of the road.
There is also a free car park in Via Lloyd where the market is held every Tuesday.

4 structures near the beach of Marciana Marina see on map

Excursion guides near the beach of Marciana Marina

Hotels near the beach of Marciana Marina

Residences near the beach of Marciana Marina