Crystal clear sea in a quiet beach far from the crowds 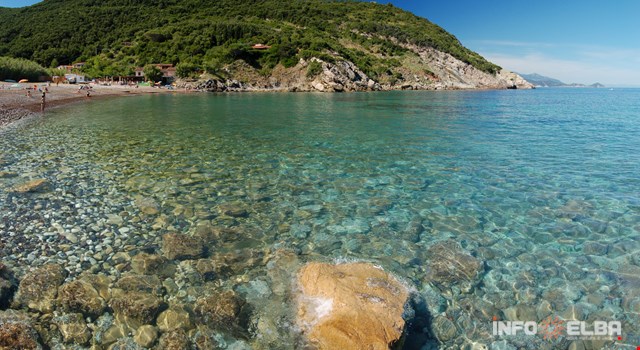 There are no bathing establishments on this beach that consists partly of colourful shingle of different sizes and partly of coarse grain sand; it is 120 metres long and 15-20 metres wide, and is exposed mostly to winds from the south west, west and north west.

It is considered a "pristine" beach, because it is cleaned frequently and is completely untouched by man. You will see a lot of posidonia (wrongly considered sea weed) on the beach, as well as the odd tree trunk brought in by the tide.

On days when the sirocco wind is blowing the beauty of the crystal clear water is breathtaking: the medium sized white pebbles and different coloured shingle next to the promontory on the right hand side of the beach is a spectacular sight. A short path that starts off here takes you along the promontory to the "red stones"  as well as to Mangani beach, but we advise you to avoid going during the hot, afternoon hours.

A cane thicket separates the beach from the few houses in Nisportino. On the left hand side of the beach you'll find a Bar / Pizzeria /Resturant where you can also hire sun umbrellas and sun beds.

The beach is perfect for those who want to escape from the city and have a completely relaxing holiday.

How to get there

You can get to the beach either from Bagnaia or from Rio Elba. If you're coming from Bagnaia, follow the road for Rio Elba-Nisporto for 4,9 kilometres; although it has a lot of bends, the view more than makes up for them: Portoferraio and the northern coast in the distance as far as the Enfola promontory overlooking the sea, and valley after valley of Mediterranean bush that goes right down to the sea. Once you get to Nisporto, keep going up and downhill towards the sea for another 4 kilometres. If, on the other hand, you are coming from Rio Elba, follow the road for Nisportino-Nisporto for 5 kilometres.

The car park is along the short road that goes right to the beach.

5 structures near the beach of Nisportino see on map

Apartaments near the beach of Nisportino

Campsites near the beach of Nisportino