Long beach with a rugged appearance 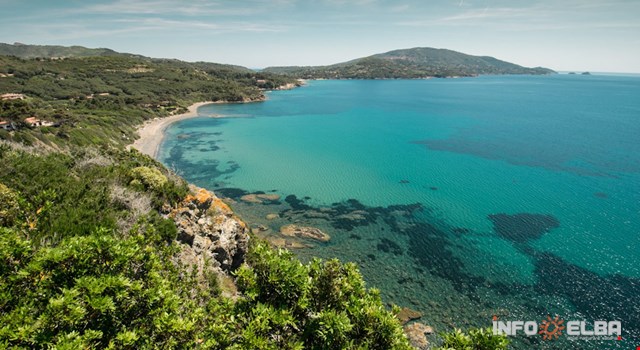 Norsi is in the Stella Gulf, and is a perfect example of a dark sands beach, typical of the southern side of the Island. Although it gets mostly southern winds, it is in a favourable position even during the cooler months.

All in all the beach is quite long (about 400 metres), and is divided into two parts by some rocks that go down as far as the sea. The beach is of two different types: in some parts it consists mainly of dark, fine grain sand, while in others it consists mainly of black shingle. Depending on the weather and the tides, you sometimes get areas of sand mixed with posidonia.

The water is very shallow till quite far out, so going into the sea is very easy and pleasant. Just be careful in some areas where there are some stones and rocks between the shore and the sea. Going into the water from the left hand beach is a little more complicated, because there are large stones right at the water's edge. The beach on the right is more suitable for children.

The typical, lush Mediterranean scrub that grows right down to the beach gives it a somewhat untouched and natural appearance. Two small bars are open during the summer months, and there is also a small, bathing establishment where you can rent sun umbrellas and sun beds.

How to get to Norsi beach

Follow the road from Portoferraio that goes to Capoliveri and Porto Azzurro, then turn right at the junction for Lacona. The first road to the beach, which is also the busier of the two, is the grit one on your left, about 700 metres after the junction, with the sign saying "Norsi". There are very few free parking spaces in the small open space near the paths that lead to the beach, but there is also a larger, fee paying car park further along.

You can get to the beach by following two grit paths: the one on the right is narrower and rather bumpy, steep in some parts, and with some steps; the one on the left - easier and safer if you have a pushchair - is wider and smoother and goes round the walls of a private villa.

Bear in mind that during the summer, cars that have not been parked correctly and in any way cause problems to traffic - the road down to the beach is rather narrow - will be fined.

There is another way of getting to the beach: go along the main road for Lacona and stop on the promontory that looks over all of Golfo Stella. The view from here is breathtaking, and you will easily see the beaches of Norsi on the left, and that of Acquarilli on the right. Two narrow, grit paths start here and lead right down to both beaches.
There are very few parking spaces at the side of the road that leads to the promontory, and about thirty in the fee paying car park at the top of it.

7 structures near the beach of Norsi see on map

Apartaments near the beach of Norsi

Hotels near the beach of Norsi

Residences near the beach of Norsi