Coves and inlets for nudists on the Island of Elba

Apart from some semi deserted coves that you can only get to by sea, there are also some places you can reach on foot that have always been for nudists. Here is a list of six of these, both nudist beaches and rocks, that have been so for decades.

It goes without saying that in all of these areas you must use some common sense and behave accordingly. If everybody on the beach is wearing a swimming costume, wear yours too, even moreso if there are children around! Here is a list of the beaches and rocks: 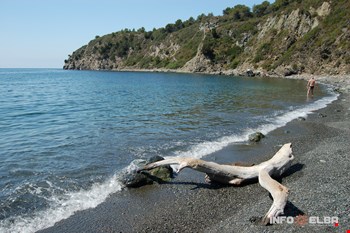 After a rule was emitted in the summer of 2016 on behalf of the Capoliveri Town Council, Acquarilli is the first beach for nudists on the Island of Elba: the perfect place if you don't want to wear a swimming costume and enjoy the sea in complete freedom. This beach is mostly made up of small, black stones so it gets very hot at the peak of the summer. We strongly advise you to take your sun umbrella with you. There are no bars on the beach.

There are high cliffs behind it which means the sun sets quite early in the afternoon. The walk down to the beach isn't very easy because the road is quite steep with a difference in level of about 100 metres, but the view of the sea bed from the top of the road makes it more than worth it.

A small beach near Lacona (about 80 metres long) that can be considered a small beach whose access, in actual fact, is from the Stella Mare Campsite. You can get to it from the rocks on the left of the beach of Lacona, just walk along them until you get to some steps that lead to the campsite, then go through the campsite until you get to a white house: the path that leads to the nudist beach starts there. 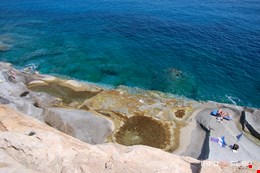 These are beautiful granite cliffs, very hot in the summer, between Fetovaia and Seccheto. There are two parking areas with a wooden fence at the top of the road, from where a short path down takes you to the rocks. The beautiful granite formations go right down to the sea and create natural small pools of sea water. 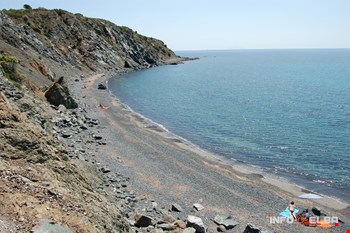 Where it is: coming from Marina di Campo, go past Cavoli, Seccheto,and Fetovaia and watch out for a sign saying "via Panoramica" on your right, go round the bend and you'll come to an open space at the side of the road with a small childrens' play area; you can park here.

It takes at least 10 minutes to go down, and about 15 to get back up, and even though there is no shade, the typical Mediterranean scrub perfumes of lavender, rosemary, and pink and white cistus are in the air all around right down to the beach. The beaches consist mainly ofblack/grey pebbles of different sizes. There are no facilities either on the beaches or nearby. The actual nudist beach is on the right of the main beach, past the rocks.

Small, rock area about 80/90 metres long between the two beaches, plus a small, sheltered cove on the right. The rocks are easy to get to and the sea here is beautiful. 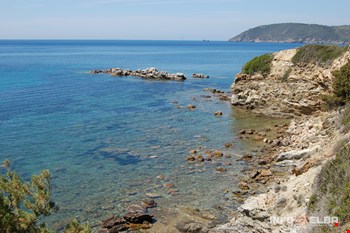 Shortly after the traffic lights at the junction for Capoliveri and Porto Azzurro there is another junction on the right that leads to the beaches of Zuccale and Barabarca (there's a small chapel on the right immediately after the junction, first left at the next junction). There are two spacious car parks, the smaller one on the left is free, in the direction of Barabarca, the larger one on the right above Zuccale beach costs 0.75 euros an hour. To get to the rocks go left in the direction of Barabarca, then follow the path for the beach, and shortly before it there's a broken wooden fence; go right and you'll get to the nudist beach. 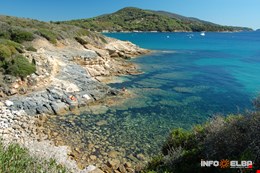 It isn't very easy to find the path on the right of the car park that takes you to Felciaio beach. At about 10 metres from the right hand corner of the car park (where the path for Felciaio more or less starts), facing the sea, you'll find a path in the middle of the bushes that goes down amongst Mediterranea scrub.Two minutes later you're at the rocks. On the other hand, if you follow an old underground path used during the war you can get there quite easily also from Lido di Capoliveri. Be prepared, however, to see bathers in their swimming costume.

Sheltered beaches depending on the wind