One of the best known beaches on this side of Elba, with numerous facilities 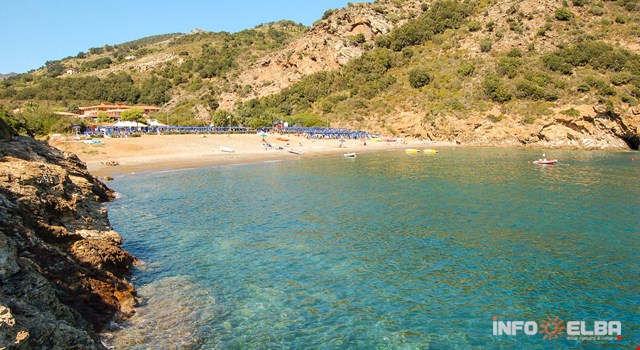 One of the best known beaches on this side of Elba. About 150 metres long and up to 50 metres wide, it consists of tiny stones mixed with sand.

The name probably comes from the fact that in the distant past, thanks to the high quality of the soil and the abundance of water, the valley was intensely cultivated.

There are cliffs covered in greenery as well as the tiny island on the southern side, and the beach reaches the far end of the valley bearing the same name.

Ortano used to be one of the major iron mining areas, and this is why there is still much architectural proof of that time to be seen: the bridge for loading the minerals on to the ships as well as the rails the mining carts went along.

The water is crystal clear so it is perfect if you want to go snorkelling, and you must make a point of going out to the tiny island called Ortano. You can either swim out to it or walk, if you choose the latter just walk along the rocks and past the tiny beaches on the right hand side of the bay.

On Ortano beach anti-jellyfish protective nets have been installed to enable you to go swimming without having to worry about being stung by a jellyfish.

How to get to Ortano beach

The beach is right at the end of the deep Ortano valley. Whether you take the road starting off at the roundabout for Rio nell'Elba, or the deviation between Rio Marina and Rio nell'Elba, it's only a 2 kilometre drive.

Once you get to the tourist resort you have to park your car in the free car park, then take the road on the right and walk for about 200 metres.

In summer months you can also get to Ortano by bus because there is a free bus service connecting the town and surrounding territory of Rio Marina to the beaches therein.