The nineteenth century elegant viila watches over it 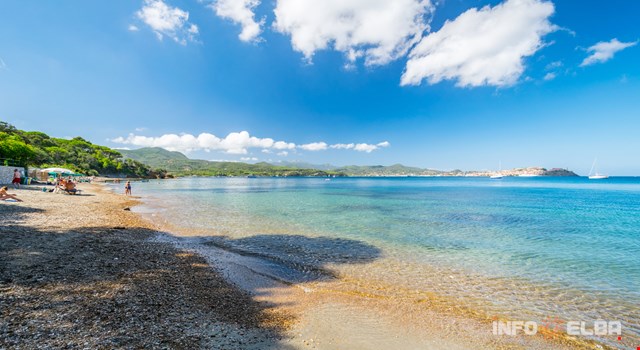 Ottone beach is on the eastern side of the gulf of Portoferraio and from here you have a magnificent view of the old part of the town with its lighthouse, the Medicean Fortresss and also a good view of Monte Capanne in the background that completes the picture.

The beach is just over 320 metres long and there is a tiny wooden bridge in the middle. It is made up of shingle mixed with sand, and the water is shallow till quite far out so it is perfect for families with small children.

Both the harbour opposite and the hills behind it help shelter it from the wind.

The beach is seldom crowded, because most of the tourists who go there are guests in the hotel on the beach that was once an elegant, nineteenth century villa but that today has been turned into a 5-star hotel. The central part of the beach is run by the Hotel so here there are sun beds and umbrellas while on the eastern and western sides the beach is free but it is always kept clean.

Near the beach there are the remains of two furnaces because in the past lime from the nearby quarries was baked there.

Some small rocks to the right separate the beach from Ottonella beach that is a little more excluded and rugged.

As well as the bathng establishment, you can also hire sun beds and umbrellas and pedalos on the beach, and there is also a bar as well as a landing aisle for boats.

If you wish to go on a

How to get to Ottone beach

Take the main road for Bagnaia, and once you have passed the entrance to the Villa Ottone Hotel you will see a sign approximately 200 metres further along for a diving school and also the beach.

There is no actual car park as such by the beach so you will have to park your car in one of the few parking spaces along the side of the road.

1 structures near the beach of Ottone see on map

Hotels near the beach of Ottone