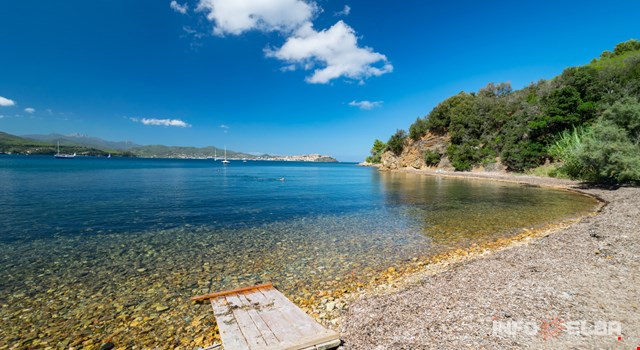 Ottonella is in a part of the coast that is truly beautiful and rugged, and is often considered the younger sister of the neighbouring Ottone beach, from which it is separated by some spiky, pointed rocks (that, if you want, you can walk across).

Sometimes it is also called Concia (di Mare) beach; the name comes from the fact that in the area as far back as the early 1900s plants like hemp, linen and cotton were cultivated and then worked on.

The beach is both unique and very suggestive, and completely free.

Somewhat deserted and quiet, and actually consisting of four, tiny inlets, it consists of pebbles of different sizes mixed with sand.

There is a small pinewood at the back of the area nearest Punta Pina (to the right) where you can cool off in the shade, while the area nearest Ottone is almost hidden by the lush, subtropical vegetation, and this makes the beach unique and gives it a rugged appearance. Consisting of agaves, palm trees and majestic, eucalyptus trees, this lush garden is proof of the acclimatization experiments carried out at the end of the 1900s in the nearby Botanic Gardens.

Sheltered from the wind by the harbour, only winds from the north west blow there.

Just like the nearby Ottone beach, from here you have a good view of the harbour and the outline of Portoferraio with Monte Capanne in the background.

From Ottonella beach, the coastline towards Punta Pina and which separates it from Bagnaia is very interesting if you like going snorkelling: the water is shallow till quite far out so the beach is perfect even for those who are not yet expert scuba divers.

How to get to Ottonella beach

You can reach Ottonella even if you walk from Ottone beach, or, if you prefer to go by car, just follow the main road from Bagnaia. Approximately 450 metres after the entrance to the Villa Ottone Hotel, turn left and you will come to an open space where you can park your car ; here you will see the start of a short path that takes you right to the beach (not signposted). Keep going along the main road for approximately another 150 metres and you will then come to several other open spaces where you can leave your car, as well as two paths (they too aren't signposted) that go right down to the beach.

1 structures near the beach of Ottonella see on map

Campsites near the beach of Ottonella