Beautiful sea bed that is perfect for scuba diving and snorkelling 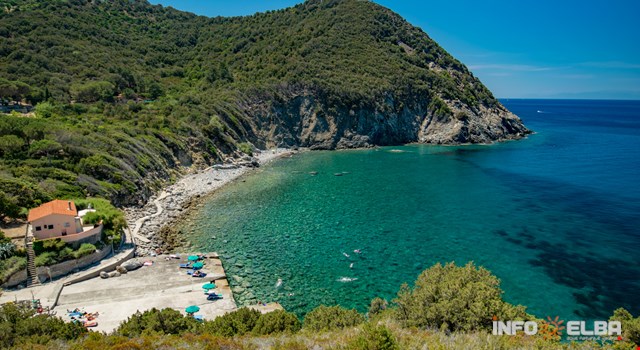 Patresi beach sits at the far end of Patresi Valley, with steep rocks on either side. On the western side the majestic white Punta Polveraia lighthouse watches over the bay.

The beach is about 150 metres long, and some large rocks half way along more or less divide it into two separate and very different parts.

The first consists of medium/large granite pebbles that make it somewhat less practical, while the second one consists mainly of fine pebbles so it is the more popular of the two; you can get to it along the cement walkway made for this purpose.

Since it isn't very comfortable to lie on if you want to sunbathe, we advise you to take a beach mattress with you.

To the right of the beach there is a cement platform where you can rent sun beds and sun umbrellas , and if you want, you can do some diving from the small mooring wharf that you can get to by going up one or two steps. There is a bar/restaurant behind the platform if you want something to eat or just a snack.

There is also a launching area and mooring lane for boats on the right hand side of the beach.

It isn't a busy beach, and its rugged aspect ensures peace and quiet as well as crystal clear water, thanks to the currents and the breezes that blow over the western coast around Monte Capanne.

The sea bed is stunning and rich in many different species of fish, shellfish and marine flora, so it is perfect for lovers of snorkelling and scuba diving.

The beach is on the western side of the island, and on a clear day you can see both Capraia and the outline of Corsica with its mountains and the town of Bastia: the perfect panorama for breathtaking sunsets.

And don't forget the nearby Punta Polveraia (or della Guardia) beach, that you can get to either by boat or on foot, by walking down a rather steep path that starts off at one of the bends before Patresi beach.

How to get to Patresi beach

It it is easy to get to from the town of Patresi, or to be more precise, from La Guardia. Look out for the signs saying "beach" then go down Via il Faro for about 1,3 km that runs alongside the Punta Polveraia lighthouse. You can park your car at the side of the road or in the car park about 100 metres just before you get to the beach, but in this car park you have to pay with only about 20 free spaces and another 20 at a fee. From June 1st to September 9th the cost is 1 euro per hour, but only 50 cents from May 1st to May 31st and from September 16th to October 15th.

Patresi is connected both by the local bus service and, during the summer, you can also get to the beach thanks to the the Commune of Marciana Marebus shuttle bus service.

6 structures near the beach of Patresi see on map

Apartaments near the beach of Patresi

Bed & breakfast near the beach of Patresi

Diving Schools near the beach of Patresi

Hotels near the beach of Patresi