In the heart of nature 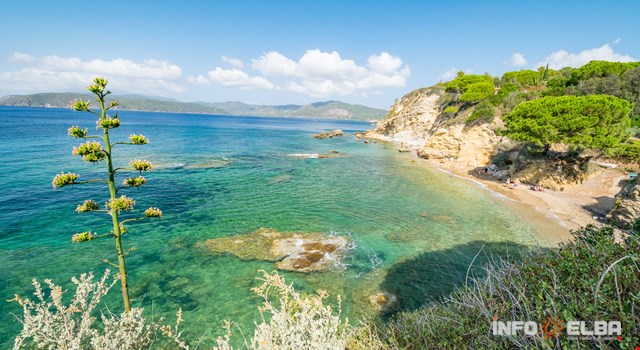 The tiny, sandy beach of Peducelli, just over 120 metres in length, is a narrow beach made up of sand mixed with shingle.

The entire setting is quite strange and at the same time very picturesque: suggestive cliffs behind it, characterized by yellow coloured rocks that seem to cut the beautiful inlet in half.

It is not unusual to see several small boats that have been tied up and left leaning against the rocks in order to protect them from the strong waves when the sea is rough during the winter, as well as ensuring they don't take up any room on the beach. Peducelli is no doubt one of the less known and more secluded beaches in this part of the Stella gulf, mainly because there is absolutely nowhere to park so most of the people who go there are either residents or tourists staying at the nearby villas and apartments.

The beach is perfect if you want to have peace and quiet with only nature all around you. The fact that there are rocks all around means the water is usually a beautiful green/turquoise colour, and is always crystal clear, so this makes the area perfect for snorkelling. The seabed is rich in flora and fauna: posidonia, rock fish, perches and small octopus.

Since the beach faces southwest, mostly winds from the south west blow there so it is quite sheltered.

If you follow the short path above the beach, on the left hand side, you will get to an area on the cliffs made up of tiny inlets and coves called Le Spiaggette. The rocks here are so smooth and flat that they seem to invite you to sunbathe on them or dive off them into the sea that is almost always unbelievably crystal clear.

There are no signposts so getting there is far from easy. Unless you go by motorbike, scooter or bike there is nowhere to park so you have no choice but to get there on foot, which means following a path that isn't very easy, then going down some steps and then following another path.

Take the road from Capoliveri in the direction of Innamorata, then turn right and head for the Sanctuary of the Madonna delle Grazie; about 300 metres before you get to the Sanctuary - it's approximately 30 metres before you see the sign for Madonna delle Grazie - take the grit road on your left that leads to the beach and some private houses. Once you are on the grit road head right towards the entrance to the Villa Maria residence, and keep going right until you get to a villa with a white gate. Keep going until you get to some steps, make an 180° turn, then go straight on. From the main road to here it's approximately 450 metres all in

3 structures near the beach of Peducelli see on map

Apartaments near the beach of Peducelli

Small villas and detached houses near the beach of Peducelli

Residences near the beach of Peducelli