A tiny inlet much loved by boatmen 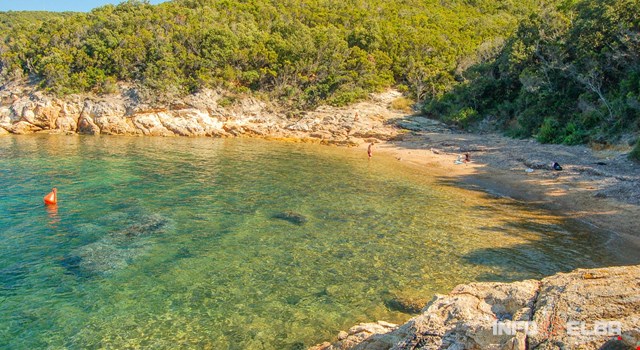 Porticciolo is a tiny beach that is only 40 metres long and about only 4 metres wide, that you get to by following a path through a wood rich in holm oaks, strawberry trees and heather and surrounded by high Mediterranean bush.

It consists of tiny shingle mixed with coarse grain sand- Although most of the beach is covered in posidonia, the quantity depends on the tides at the start of the summer, so there might even be very little.

The beautiful cliffs on both sides of the inlet make the beach perfect if you want to go snorkelling.

The fact that Mediterranean bush surrounds the beach, plus its actual position, mean that it is in the shade from the early hours of the afternoon: in mid August it is already in the shade by 4.30 p.m.

The view from here of the far end of Enfola and Penisola is breathtaking.

During the summer you will see several boats moored at the mooring buoysthat are just off the beach and not too far from the tiny bay.

Since it faces North-East, winds blowing from the opposite direction will be no problem, be they "Scirocco" - from the south-east - or "Ponente" - from the west.

How to get there

If you want to go to Porticciolo beach you have to follow a path - it's in the shade - through the woods that runs longside the cliffs and in just a few minutes you will get to the nearby Lamaia beach (about 300 metres farther along on the right).

There is also another path, on your left if you're facing the sea, that takes you to La Guardiola; on the right hand side of the long, sandy beach in Procchio you have what is known as theSentiero della Salute ("Fitness Track") that goes from Biodola beach to the one in Procchio.

2 structures near the beach of Porticciolo see on map

Apartaments near the beach of Porticciolo