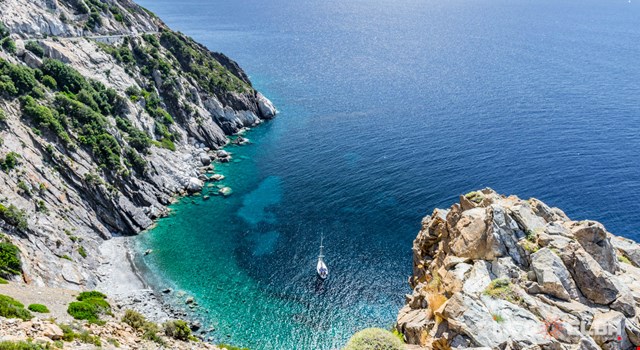 Punta Nera beach is called after the name of the point that is on the most western part of the island.

It is probably one of the most intriguing and fascinating, and probably one of the most frequently photographed, places on the Island of Elba, esprcially by those going along the western ring road. Just before you get to Chiessi (coming from Marciana, Colle d'Orano, Campo Lo Feno) you will find yourself at the top of some very high and steep cliffs at a height of one hundred metres; from here you can admire thebrilliant colours and the breathtaking beauty of the sea below.

The tiny beach, consisting of shingle of different colours and sizes is divided into two by a landslide of very large rocks. The colour of the high, sheer cliffs stands out and is in direct contrast with the crystal clear turquoise of the sea.

Despite the incredible beauty of the surrounding environment and the unique, breathtaking clarity of the sea, the beach is usually very quiet because it is very rugged plus you can only get to it by sea. And this explains why it is perfect if you want absolute peace and quiet.

It goes without saying that not many people go to this part of the coastline, but it is very popular if you are keen on snorkelling.

Punta Nera is the most western point on the Island of Elba which means it is exposed to practically all the winds and currents from the east.

Getting to Punta Nera beach

The only way to get to Punta Nera beach is by sea. The distances by boat are as follows: 6,7 miles from Marciana Marina, approximately 8,6 from Marina di Campo.

Sailing distances on the Island of Elba