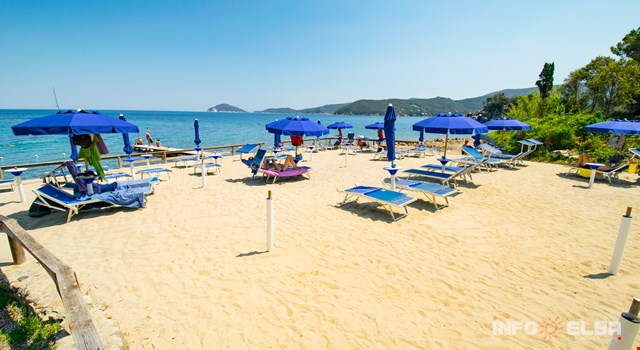 Redinoce beach is on the northern side of Elba and very near Procchio, and it sits on a beautiful, rugged coast. Its name comes from the valley behind it, and the beach has come to be thanks to the the rocks, pebbles and sand brought down by the rain from the valley over the years.

There is only one bathing establishment - called Redinoce - and it takes up most of the beach: they rent out cabins, sun beds and sun umbrellas, canoes, and there is also a bar. The owners have also built a rather large sort of sand platform on the beach, and at the back there is a childrens' play area.

The right hand side of the beach is free if you want to sunbathe there, but unfortunately it isn't very big - about 100 metres long - and consists mainly of medium/large stones .There are, however, some areas where the larger stones and rocks have been removed, and the tiny shingle mixed with sand has been levelled off so if you wish you can open out your beach towel there.

There is a rocky barrier to the left but you won't be able to cross it, and a little further along there are two tiny coves that you can only get to by sea.

Redinoce beach is to the left of [page id="294"[Paolina beach[/page], and here too the tiny island enhances the view that stretches from the gulf of Procchio as far as the Enfola promontory.

Snorkelling lovers will enjoy swimming out to the tiny Paolina rock, but watch out for others because during the summer months it is a very popular excursion.

On the beach there is also a wharf for mooring small boats.

There are two ways of getting to Redinoce. If you take the main road from Procchio to Marciana Marina you will see the first sign for Redinoce beach shortly after that for Paolina beach. It is a 300 metre long, unsurfaced road that is no problem however if you decide to drive down.There are very few parking spaces along the road. Once you get to the bottom, a short, pedestrians-only path leads right to the beach.

The other way of getting there is to follow the main road then turn off when you get to the Le Briciole hotel, with the added advantage that you will be able park in the open space futher along and admire the fantastic view.

1 structures near the beach of Redinoce see on map

Bathing establishments near the beach of Redinoce