Very popular among lovers of minerals 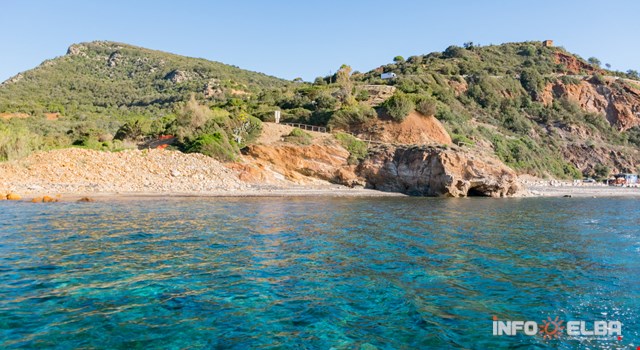 Ripa Bianca beach lies on the eastern coast of the Island of Elba, just a little further to the south than Topinetti beach.

Both pristine and rugged, this beach takes its name from the large, white stones that lie on the dark sand mixed with ematite dust that sparkles in the sun that the beach is made up of; the contrast in the two colours is striking, and a further contrast comes from the colour of the cliffs to the left of the beach because the strong>rocks are red in colour due to their being rich in iron residues.

Although the beach is long and wide, it is suitable for sunbathing only along the first 80 metres because this is the most sandy part; further along, it is probably more suitable for fishermen rather than for those who wish to sunbathe.

The better known Topinetti beach is just next to it, and this explains why it is usually practically deserted, chosen mostly by those who wish peace and quiet as well as those who are very interested in minerals and love to go looking for them between the rocks along the coast.

The sea bed is perfect if you enjoy going snorkelling.

Getting to Ripa Bianca beach

After about 3 kilometres along the main road from Rio Marina to Cavo follow the signs for Topinetti beach, and when you get to a junction, turn right until you get to the beach. The road runs alongside the coast and you should have no problems in finding a parking space because the beach is usually deserted.

During the summer months you can get to Ripa Bianca also by minibus that takes you as far as Topinetti.