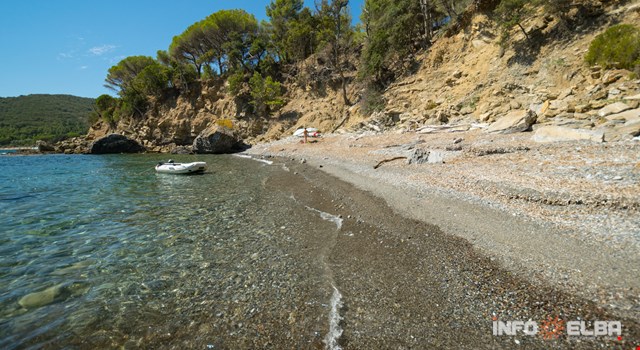 The name Salandro Due has been chosen for this beach because both are between [page id="711]Galenzana[/page] and Marina di Campo; for this reason they are often referred to as "Salandri" ( you can easily walk across the rocks that separate one from the other).

Salandro Due is one of the most southern beaches in the gulf of Marina di Campo and is also very near the actual town. Approximately 50 metres long, it is also slightly longer than her "sister", and consists of sand mixed with small pebbles that at times are covered in posidonia that has been washed up by the tide and that has dried in the sun.

The steep cliffs behind the beach are covered in vegetation that practically goes as far down as the beach.

As with all the other beaches along this part of the coast of the Island of Elba, Salandro Due can be considered a tiny, pristine paradise on earth from an environmental point of view, as well as being absolutely unique and secluded.

Since you can get there only by sea, Salandro Due is usually very quiet and peaceful.

Those keen on snorkelling love the crystal clear sea.

The view from the beach goes from Capo di Fonza as far as Punta Bardella (at the far end of Galenzana beach).

Since this beach too is inside the gulf of Marina di Campo it is sheltered from the winds from the north-west to the south.

Getting to Salandro Due beach

Unless you want to walk there from Galenzana beach and then Salandro, and due to the fact that the paths that once existed have since been closed off, the only way to get there is by sea.

Sailing distances on the Island of Elba