Very small and well protected by a wharf 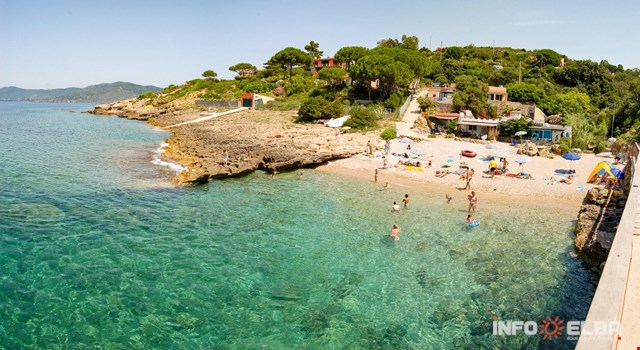 There are two tiny inlets along a low part of the coast that is also rich in tuff between the two beaches of Barabarca and Madonna delle Grazie.

Their names are Stecchi, a name which probably comes from the word "stecchi", that is, small, dried tree trunks that are washed up on the shore after a storm.

Stecchi beach is enchanting because it can be described as a tiny, peaceful paradise on earth that faces a crystal clear sea. Approximately 26 metres in length,it consists of shingle mixed with both fine and coarse sand.

To the left the beach is sheltered by a high wharf that is no longer in use, but that in the past was used for loading the ships with the minerals from the nearby quarry: it is absolutely unbelievable diving into the water from there!

If you head for Madonna delle Grazie bay you will come to two natural swimming pools that have come to be thanks to the rocks, and they are both truly characteristic; behind them you have the tiny  Maretto beach.

Thanks to its unique composition and the jagged structure of the rocks on the right hand side of the beach that are very similar to a "bench", that are simply a group of sedementary rocks formed by the waves, the beach is truly interesting. Unfortunately most if not all this part of the beach is not suitabe for sunbathing because the rocks are very jagged and rough.

Since the beach isn't very well known it is usually very quiet, but on the other hand it is perfect if you are a lover of swimming or snorkelling because you have a clear view of the fascinating sea bed even just a few metres from the shore.

Getting to the beach

Keep going for another 340 metres then turn right at the junction that you will recognise immediately because it is built in dry stone and there is also a road mirror at the side of the road. Follow the road down past numerous houses then take the left turning at the junction and keep going downhill.

At this point you will see the signs for "Il Maretto" then head left towards the apartments then right for the beach, and you will arrive at Stecchi beach.

Suggestion from Infoelba: During the summer months it is very difficult to find a place to park, so we suggest you park further back or, better still, go there by bike or scooter. If you prefer, another way to get to the beach is to start off at Madonna delle Grazie and then from there go on foot along the coastal road.

2 structures near the beach of Stecchi see on map

Apartaments near the beach of Stecchi

Villas near the beach of Stecchi