Some geographical information in order to fully comprehend Elba's size

Those who have never been lucky enough to go the Island of Elba often look upon it as simply a small island in theTirreno Sea, not very different from its "sisters" that make up the Tuscan Archipelago. The fact is, even if it is much smaller than Sicily and Corsica, the size of Elba is very different from that of the others.

With an area of 223 square kilometres and about 147 km of coastline it is the third largest island in Italy. Going from east to west the longest part is 27 km while from north to south the widest is 18 km.

Elba is 10 kilometres from the nearest point of the mainland, (or from the "continente", as the locals say). If we consider the route the ferries do from the port of Piombino Marittima to the port of Portoferraio, where the majority of the ferries cross to and from, the distance is about 22km. 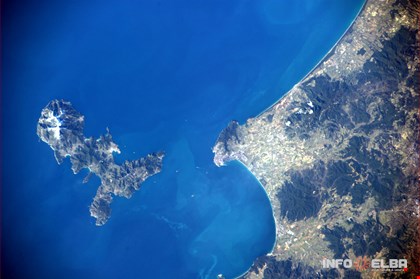 There are 50 km between Elba and Corsica, France's largest island. The other islands in the Archipelago are much nearer: Pianosa is about 13 km from Elba, and Capraia is about 33 km.

Being so near means you can see both Corsica and Capraia, as well as Pianosa and Montecristo, more or less every day. On a really clear day, especially after heavy rain or strong winds from the north, you can just about see all of Corsica and sometimes even the snow at the top of the mountains, or the northern Island of Gorgona (about 70km), the south eastern Island of Giglio (about 50km), as well as the south eastern Island of Giannutri, about 75 km away, just behind Giglio. You can even the coastline of the mainland from the Appenines in the north, on the Tuscany-Emilia Romagna border, and Monte Argentario on the south east.

Distances between the other islands