The Archonfraternity of the Reverenda Misericordia was founded by Giovanni de' Medici in 1566.

Not having a church of their own at the time, initially they used the right altar with the sixteenth century wooden crucifix inside the Dome.

This small church was built in 1677, and the relics of San Cristino, the martyr patron saint of Portoferraio, are kept here. Since 1852, every May 5th a mass in Napoleon's honour is held here.

The pipe organ, made in 1792, is of great value, as is also the Madonna with Child on the left of the stoup, believed to have been made by Giovanni Pisano's pupil Tino da Camaino. 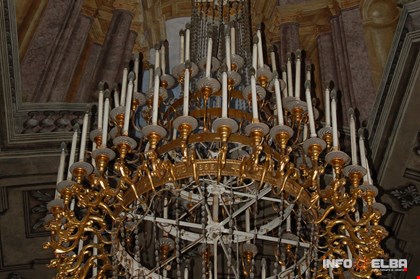 Going towards the left of the apse there is a shrine with a large wooden royal crown inside, in rememberance of the "sacrilegious" transformation carried out by Napoleon Bonaparte in 1814 when he had the Church of Carmine turned into a Theatre:

In memory of the change
from a sepulchural oratory
wanted by Napoleon l
it was changed into public theatre
whose imperial dignity
did fleet over
this crown
where the stately stage shows
here in this pious place it finally rests.
Oh thrones that fall
Oh the fickleness of fortunate glory
Oh the truth of every human type.

The urn with the Saint's remains, made a martyr in 65 during Nero's persecution, was found in 1661 in Rome in the Priscilla catacombs. That same year, Antonio Vai, from Portoferraio, asked Pope Alexander Vll to grant a "holy body" to the Reverenda Confraternita della Misericordia in Portoferraio, of which he was a member.

The Pope agreed, so Mr Vai immediately took the holy relic to Portoferraio. It is believed that the Saint's body arrived on April 29th, the very same day the people, and later on the church, consacrated San Cristino. In 1764 Clemente Xlll declared San Cristino Patron Saint of Portoferraio.

In the small museum beside the Chiesa della Misericordia, not only paraments, vases, monstrances and sacred calices are kept here, but you can also see the Flag with the three bees embroidered in gold thread that Napoleon left to Elba on May 4th 1814, the bronze mask Napoleon wore on his death bed, donated by Prince Anatolio Demidoff and the bronze cast of his right hand given by the Armée Museum of Paris.

There has been a hand pulled ambulance, restored by the Misericordia in Portoferrai, on show in the museum since 2016, and is well worth a visit.

For further information download the self guide of the Misericordia Museum made by the students in the 2A class at the "R. FORESI" Liceo delle Scienze Umane dell'Istituto Statale d'Istruzione Superiore.